You are here: Home / Screen / Breathless 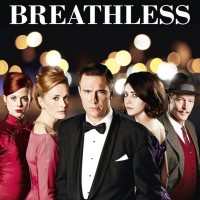 Paul Unwin, who wrote all three parts (collaborating on two of them) and directed the premiere, has stitched an awful lot into these three 90-minute chapters: Class distinctions, infidelity, a central mystery regarding the Powells’ past and the dangers associated with abortion being forced underground. Reminded his work is illegal, Powell says the law “makes miserable lives and miserable women.” Like “Mad Men,” there’s little nostalgia here for the good ol’ days, even if Anne Dudley’s bluesy, evocative score and settings like a jazz club where they play the “Peter Gunn” theme sort of makes one long to visit. Because it’s also a time when a doctor whose wife is unhappy because he’s betrayed her can cajole a colleague to medicate her so she’ll be more docile. (A woman who begins experimenting with the birth control pill notes the freedom will let her “be like a bloke, I suppose.”) Throw in a splendid cast and “Breathless” is a pretty near flawless condensation of soap-opera conventions into a delicious little package. The only conspicuous misstep, in fact, is its rather nondescript title. Because when a story is crafted as meticulously as this one, the temptation is to breathe in every last bit of it.

Writer and director Paul Unwin (whose 27-year stint on Casualty proves his medical credentials) gave us a drama perfectly pitched between Mad Men and Call the Midwife, from the characters’ permanently rouged lips to the opulent décor, old London street scenes and mournful saxophone solos.
The dialogue was witty, historically accurate (peppered with talk of V2 bombers and Lyons Tea Shops) and hinted at just enough repressed emotion that something explosive (probably that pistol in Powell’s desk drawer) is sure to go off in the next instalment.

It’s all highly watchable and the Sixties trappings are unusually well done.

Breathless is good at that; the 60s kitchens, the dresses, the Brylcreem and the buses, the Austins and the Morrises, the drink-driving. Also at the paradoxes of the age – the looking both forwards and backwards, the rampant sex and rampant sexism, the shiny new NHS and the lingering stuffiness etc. It looks great, and it captures an age, a fascinating one – key elements in any period drama. Plus there are no screens or texting. You can forget the modern world for an hour (except that you’re probably tweeting along).