You are here: Home / Screen / Game of Thrones VI 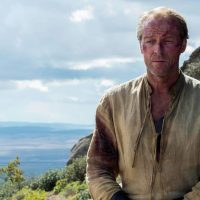 The season follows the continuing struggle between the Starks and other noble families of Westeros for the Iron Throne. The Starks defeat the Bolton forces in battle, and Jon Snow is proclaimed the King in the North. Tyrion attempts to rule Meereen while Daenerys is held captive by a Dothraki tribe. At King’s Landing, the Tyrell army attempts to liberate Margaery and Loras, but Margaery capitulates to the High Sparrow, who becomes more powerful by influencing King Tommen. At her trial, Cersei burns the Great Sept, killing her rivals, while Tommen kills himself. Unopposed, Cersei is crowned Queen of Westeros. Ellaria Sand and three of Oberyn Martell’s daughters kill Doran and Trystane Martell and seize control of Dorne, and Olenna discusses an alliance with Ellaria. In Essos, Daenerys Targaryen is captured by Khal Moro who takes her before the khals; she burns them alive and takes command of the Dothraki.

Game of Thrones became the highest ever winner of Emmys of any primetime TV show in the history of the awards.

Game of Thrones” is the best show on television.