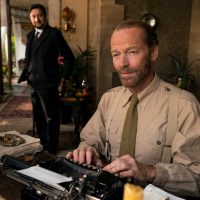 It’s 1963, and Alison Wilson returns home to find husband Alexander dead. Soon afterwards, a woman unexpectedly arrives at the door, claiming to be Alec’s ‘real wife’. Alison embarks on a mission of discovery to try and find out who her husband really was; but from their wartime romance whilst working for the secret service, to a mysterious period in India – it soon becomes clear that Alec died holding his secrets close to his chest. Alison is left craving the truth as she makes discoveries that threaten to tear her carefully crafted world apart.

The acting is a major attraction. Alex is a perfect role for Iain Glen. He helps us see that a person can be both a loving family man and dreadfully, tragically flawed. If Glen telegraphed evil to us in any way, the whole story would come off more like a Lifetime production. Instead his Alex is enigmatic but charming and, it seems, living in the moment. Ruth Wilson, too, is excellent.

I stand applauding the fact that any man can find the time to even cheat on himself. Alec had been an intelligence officer among the murk of the second world war’s Special Operations Executive, a major allegedly, and lived several lives. All of which are brought wonderfully to light and life by Iain Glen, Ruth Wilson, Keeley Hawes, Fiona Shaw and others, playing and replaying the aftermath of the second world war, its hints and lies and subterfuges and openings. Sometimes I wonder whether the second world war has become Britain’s creation myth.

Ruth Wilson, I suppose naturally, makes an excellent job of her grandmother’s predicament, as a young bride and as a widow, while Iain Glen carries off the rare quality of credible insouciance that only a truly outrageous cad possesses. And Patrick Kennedy is also excellent as a further casualty of Alec’s unusual way of life, while Keeley Hawes pops out of the woodwork too. Maybe one day her characters will settle down and meet nice boys.
The attention to period detail is doubly impressive, melding as it does the 1940s, when Alison was the young wartime bride and mum, and the 1960s, as widow and, indeed, victim. Through some clever direction, we, and Alison, could occasionally catch glimpses, cameos if you will, of the major’s other lives and other women.
They are all deftly done, these little examples of deception visited upon the audience. They make the point. Keeley Hawes, as Dorothy, is also excellent as Alec’s sultry cover story lover/real lover/wife in British India.

It’s excellent: understated, rather lovely to look at, beautifully acted. Above all, I think it has something quite subtle to say about the way we all make stories of our lives, sometimes with fatal consequences. Your truth is not necessarily mine: this sounds obvious to the point of inanity, and yet it seems to be something relatively few people understand.
“You must be his landlady,” says a woman on Alison’s doorstep, soon after Alex’s death from a heart attack – and so the two wives meet, eyeballing each other like women at a market who both want the same chicken. In the moments after this encounter, Alison appears to be in deep shock. But the viewer knows, too, that perhaps it isn’t quite so simple.
Sometimes, a person both knows, and doesn’t know, something. Even as the priest was still in the house – Alex was a devout Catholic, as well as a novelist and, perhaps, a special agent – she was locking his wallet in a bureau and hiding the key in her sewing basket. Wilson is very good at playing this emotional liminality; even when her face is at its hardest, set protectively against both the gossips and the invading force of his other family, you have a sense of the conflicting feelings beneath, certainty and confusion locked in a battle to the death. “A life used well brings a happy death,” she reads on a glib sign at the undertakers. But that word “used”: what does it mean? Setting aside all the lies, is loving more than one woman at once a sign of emptiness or of repletion? My hunch is this is a question that between them Symon and Wilson intend at least to attempt to answer.

I find Mrs Wilson utterly gripping, its period setting – here is a realm of typing pools, and little pillbox hats, and tea served in proper china cups – a wonderfully tight lid on the pressure cooker of the boiling emotions of its characters. Their stoicism and good manners enable us to feel all the more their pain and desperation.

Iain Glen (“Game of Thrones”) is equally compelling as Alec and the chemistry between them, shown through flashbacks, is intoxicating and undeniable. The two met and fell in love during the start of World War II which only intensifies their May-December courtship. With Wilson telling her own family’s story here, there’s an apparent bias in the portrayal of Alison and Alec’s sons, with Ruth Wilson’s father Nigel (Otto Farrant) coming across as a much more likeable person than his older brother Gordon (Calam Lynch). That shouldn’t make for awkward holiday gatherings, right? There are also elements of espionage and intrigue, with Alison Wilson and her sons never really finding out how much of a spy Alec was. Making matters more complicated in the film and in real life is the fact that MI5 and MI6 won’t release the files they have on Alec, who also wrote fictional spy novels in his spare time. But because Alec did work for the British government in various capacities, it is hard to decipher which of his tales were real and which ones were fabrications.
Although Alec was an indisputable bigamist, there are even questions about at least one of his marriages and whether or not the union was part of a covert operation. Such murky details will haunt the viewer and continue to perplex Alec’s descendants. The mysterious details behind “Mrs. Wilson” draw you in, but are secondary to the program’s amazing acting. Not only are Wilson and Glen terrific, but scene stealers Fiona Shaw and Anupam Kher are brilliant as ancillary characters from Alec’s secret service circle.

The narrative kept switching back to the Blitz, as Alison and Alec fell in love — good news for the many fans of heart-throb Iain Glen. He’s usually cast as a doomed mercenary (Game of Thrones) or a grizzled private eye (Jack Taylor): when he appeared in crisp WW2 Army uniform, you could hear a million women swoon.
Halfway through episode two, the reserve was finally allowed crack. The results were almost as electrifying as the smile Iain Glen had been uncorking in flashback as Alec, a natural born charmer with a penchant for leading doe-eyed ingenues up the aisle.

By the end of the hour, we began to suspect that Alec was a conman, explaining away his double life by pretending to be an international spy. Alison copied his wiles, forging a divorce certificate and keeping the truth about their father from their sons. Cad or hero, it will be fascinating to discover which he was — and to see how long Alison can deceive herself and the world. I can’t wait for the next part. – The Daily Mail *****
Glen, best known for playing the self-sacrificing Jorah Mormont on “Game of Thrones,” brings warmth and a surprising sincerity to a role that could have been played as slick or charming. Instead, he invites sympathy for a man who desperately wants it all … and more. While he’s creating a story for each wife and family, he’s also spinning yarns as a prolific spy novelist, and a good one at that. The amount of energy this man spends in fabrication is astounding. He has convinced those closest to him to believe his tales; perhaps he also wants to believe them himself.

It is Alec Wilson (a whispering Iain Glen) who truly intruiges. – The Times ****