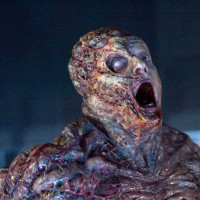 All bets are off. It’s the end of the world….the experimental T-Virus, concocted by the Umbrella Corporation, has been unleashed on the world, transforming the population into a scourge of shambling zombies with a taste for flesh.

With no safety in the cities, Carlos Olivera and L.J have gathered a group of survivors and taken to the road, traversing the empty desert highways in an armored convoy. They decide to head north to Alaska – their last, best hope for refuge from the Undead. But hidden beneath an abandoned Nevada radio tower are the sleek offices and research facilities of the Umbrella Corporation. With access to Umbrella’s constant real-time satellite surveillance, Dr. Isaacs can keep constant tabs on the convoy … but he’s searching for the one person who is the key to a cure… Alice. And she is also looking for them… and she won’t stop until they’re shut down forever. The fight is only just beginning…

This is easily the best looking of the RE series… it’s fast and fun enough not to outstay it’s welcome.

The story and characters are surprisingly engaging, with fight scenes and scares effectively placed between plot turns.

The scenes of Las Vegas returned to the sands of the desert are something rather special. Think The Day After Tomorrow crossed with the original Planet Of The Apes and you get some idea. There is also a nice turn from veteran British star Iain Glen as Dr Isaacs, head researcher for the nasty Umbrella Corporation.

News Of The World

The best of the trilogy.

Stand outs include Oder Fehr and Ali Larter as convoy leaders and Iain Glen as the head scientist who wants to ‘domesticate zombies” for use as a cheap labor force.