You are here: Home / Screen / Reyka 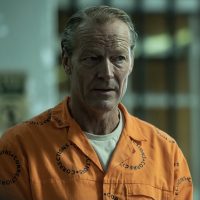 Eight-part series. A flawed but brilliant criminal profiler, Reyka Gama (Kim Engelbrecht), investigates a string of brutal murders committed by a serial killer in the sugar cane fields of KwaZulu-Natal.

Having been abducted as a child by a farmer named Angus Speelman (Iain Glen), Reyka is traumatised by the experience but this also helps her enter the minds of Africa’s most notorious criminals and turn them inside out.

Reyka premiered on M-Net in South Africa on 25th July 2021. All 8 episodes are currently available on demand.

“Reyka” is a gritty offering that meanders into a world that’s dark and dangerous. The story arcs may be unsettling but it is handled with commendable sensitivity and raw honesty.

The acting from the cast is top notch, Engelbrecht probably has a career highlight role.

Reyka is not for the faint-hearted. Directors Zee Ntuli and Catharine Cooke don’t shy away from extended, sometimes gruesome close-ups, but lovers of dark crime fiction will find their appetites for the grim and grisly well satiated with this compelling South African Noir.

We debuted the first trailer last week, which reminded me that I enjoy watching complex mysteries that unfold in environments that I have not experienced before.
Now that I’ve seen the first three episodes, I can say that the trailer only hints at what is unveiled. Kim Engelbrecht is very good as Reyka, a police investigator in South Africa who moved to the UK in her youth and has only returned to her native land for a few months.
Iain Glen is downright chilling as the monster responsible for her trauma; he’s a soft-spoken man who kidnapped Reyka when she was just 12 years old, kept her under lock and key, and groomed her to love him and his female companion. Reyka now has a 12-year-old daughter of her own, and her current case involves more than one woman who has been murdered. Who is doing the killing and why?
I love the atmosphere, which looks like an overcrowded hothouse, as well as the multiple languages spoken, which is strikingly different (for me) from a cultural perspective. In addition, the storytelling method by creator and writer Rohan Dickson is quite good, in that it drops morsels of revealing information as it goes, allowing the viewer to piece things together.