You are here: Home / Screen / Slapper 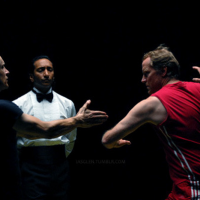 A young boy watches a fight in a crowded bar: a masked man versus the people’s champ. But rather than boxing, this is an adult, brutal version of ‘Slaps’ – slaps that can break a man’s hand.

Three years ago, James’ alcoholic father Michael left him and his mother, but promised he’d be back to make them proud – now, James believes the man in the mask is his father, returning as a hero, but things are not what they seem…