You are here: Home / Screen / The Flood 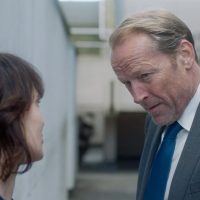 Wendy, a hardened immigration officer is offered a high-profile asylum case, judged on her ability to quickly and clinically reject applicants.

Through her interrogation, she must uncover whether Haile is lying and has a more sinister reason for seeking asylum. We follow Haile on his perilous 5000 KM journey over oceans, across borders, and amidst the flurry of the Calais Jungle to find solace and safety in the UK. But now he must cross the final hurdle.

Based on multiple true stories, The Flood is a thoughtful and timely reflection on the humanity within the refugee crisis.

Director Anthony Woodley, alongside the film’s screenwriter Helen Kingston and producer Luke Healey, spent time volunteering in the Calais Jungle, where so many asylum seekers have been forced to make camp, with little hope of continuing on to the UK and threatened with death if they return to the countries they’ve fled.

Headey herself has been involved with the International Rescue Committee for years and has similarly spent time with refugee families. The film draws its energy from these collaborators and their own personal investment, with Kingston’s screenplay taking direct inspiration from the stories of those she met in the camp. Not only has The Flood been heavily researched, but it also offers us a rare glimpse of what goes on behind closed doors during the immigration process.

It’s the eyes that get you in Ivanno Jeremiah’s performance as an Eritrean refugee, Haile. They are haunted by the trials he’s endured escaping his homeland, before finding himself in a grey cell in a UK detention centre. Enter Lena Headey’s bureaucrat Wendy, who’s keen to hit her targets.
The plot cuts back and forth between the clinical interrogation and the hardships of Haile’s journey. Despite everything Haile has endured, he still shows Wendy compassion. She’s more interested in trying to win back custody of her daughter while swigging white-label vodka from a water bottle.
Helen Kingston’s script is based on accounts collected by director Anthony Woodley during his time volunteering in the Calais Jungle. No doubt that experience led to the film’s sense of authenticity, right down to its gallows jokes. ‘Do you know what they call those who get across first time?’ Haile asks. ‘Bastards.’ He’s lost everything except his sense of humour.
‘The Flood’ is an understated, lean film, shorn of flashy camerawork or narrative pyrotechnics. Nothing is over-polished or glossed-up. Instead, there’s a searing emotional reality in evidence, not just from Haile, but from Mandip Gill (‘Doctor Who’) as a fellow refugee, Reema. As we come back to those haunted eyes, we’re given a sharp reminder that the refugee crisis is far from over. Thousands of Hailes lose their lives fleeing persecution every day.

The Flood, directed by Anthony Woodley, is a call for empathy when it comes to the refugee crisis. Headey plays Wendy, whose cold, detached manner has made her a model employee at the immigration centre, as she speeds through applications and always keeps to her quota. She’s the first choice to process Haile (Ivanno Jeremiah)’s case. An asylum seeker from Eritrea, he was arrested in his first day in the UK, after attacking the police officer who discovered him hiding in the back of a lorry. With the headline “Attacker Seeks Asylum” blasted across the front pages, the government is keen for Haile’s swift deportation so it can score points for the upcoming election. Wendy is only further hurried by her own boss (Headey’s Game of Thrones co-star Iain Glen), who wants things wrapped up by coffee time. Yet, she finds herself moved by Haile’s story in a way she never could have expected, discovering that individuals cannot be reduced down to headlines. Through their encounter, The Flood presents us with a careful, studied portrait of one of the most incendiary topics of modern politics.
. . . maybe this is the film we need right now.