You are here: Home / Screen / The Windermere Children 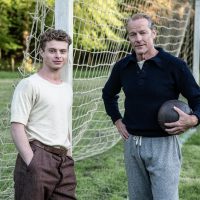 August, 1945. A coachload of children arrive at the Calgarth Estate by Lake Windermere.

They are child survivors of the Nazi Holocaust that has devastated Europe’s Jewish population. Carrying only the clothes they wear and a few meagre possessions, they bear the emotional and physical scars of all they have suffered.

Charged with looking after them is Oscar Friedmann, a German-born child psychologist. He and his team of counsellors have just four months to help the children reclaim their lives. By the lake, in sunshine and rain the children eat, learn English, play football and ride bikes. They yearn for news of their loved ones every day, and meanwhile they are invited to express their trauma through painting. Some locals taunt them but they are embraced by others. A number of the older children steal and they are haunted by nightmares. Nevertheless, it is in this environment that they begin to heal.

Eventually, letters from The Red Cross arrive with the terrible confirmation that for nearly all the children their siblings and parents have been murdered. One child, however, is convinced that his brother survived.

The Windermere Children is the stark, moving and ultimately redemptive story of the bonds they make with one another, and of how the friendships forged at Windermere become a lifeline to a fruitful future. In the absence of relatives, they find family in each other.

Every now and then, something comes along that reminds you just how powerful television can be; just how much it can touch you and move you, leaving you emotionally battered and yet profoundly grateful for the experience of having watched. The Windermere Children is one such drama.

It is rare indeed to find a television dramatisation, even one concerned, as here, with the Holocaust, that exercises such a raw emotional power.

There’s no bombast, no histrionics in the film. It’s full of quietly devastating moments.

The most powerful moments come in the final few minutes when the drama stops and the teenage Polish actors playing Holocaust survivors are suddenly replaced by the survivors themselves – real people, still alive, talking about their happy and fulfilled lives. It seems more than just a familiar device to show that the film is based on actual people and true events. Seeing these men smiling, thriving, provides an unexpectedly optimistic conclusion.

This drama’s strength was in its understatement, the orphans’ experiences eked out delicately, the temptation to ramp things up for dramatic effect resisted. Atrocity needs no loud-hailer.

Every now and then, something comes along that reminds you just how powerful television can be… The Windermere Children is one such drama.