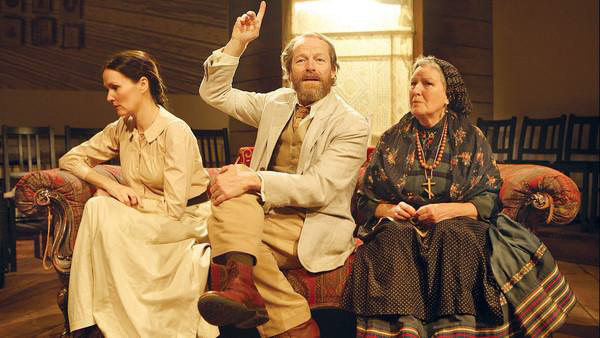 As five stagings of ‘Uncle Vanya’ hit UK theatres in a few months, why does its existential gloom speak to us so profoundly?

In a rehearsal space in east London the actor Ken Stott is poking disconsolately at the contents of a Tupperware box. It’s his lunch and he is clearly on a diet that is affording him no fun. “You won’t be able to see me by Monday,” he observes, gloomily.

It’s a moment that could almost have been lifted from the play he is rehearsing. Stott is playing Uncle Vanya, a grouchy old so-and-so, who, in Christopher Hampton’s version of Anton Chekhov’s 1897 original, even says of himself: “I do nothing except grumble like an old sour grape.”

Stott is in good company: his Vanya will be one of five to grace British theatres within a few months. Indeed the production, directed by Lindsay Posner, opens in the West End within days of a Russian-language performance by Moscow’s Vakhtangov company, directed by the renowned Rimas Tuminas, with leading Russian actor Sergey Makovetsky in the title role.

So why is this self-styled “cantankerous old codger” so much in the spotlight? Is it a coincidence? Or is there something in his grumpiness, self-mockery and frustration that speaks particularly to our time? And if so, why should that be?

Chekhov’s Uncle Vanya is a masterpiece: a humane, funny and heartbreaking study of wasted potential. But boil it down and you end up with something as dull-sounding as suet pudding. It opens on a run-down rural estate painstakingly maintained by Vanya and his niece Sonya. We first meet the local doctor, Astrov, complaining about the tedium of provincial life, and then encounter Vanya who, at 47, is undergoing a mid-life crisis of epic proportions, kick-started by the arrival of his brother-in-law, a pompous professor, and his beautiful wife. Nearly everyone feels sorry for themselves – particularly Vanya. So why do we warm to him so?

Makovetsky thinks the appeal lies in recognition. “All of us are Uncle Vanyas,” he says. “Most people who see the performance say that it is about them.”

Stott agrees. “Most of us spend the vast majority of our time complaining about something,” the actor says. “And everyone reaches the stage where they become preoccupied with what is going to happen in the second half of their lives. In this play everyone is in a crisis about that.”

Vanya’s crisis is specific: he has spent his life maintaining the estate in order to support the professor’s career. But when the tetchy academic arrives in person, Vanya suddenly feels a fool. He senses that he has wasted 25 years servicing an opinionated charlatan. Iain Glen, who played Vanya this spring, suggests that his predicament, though particular, is universally recognisable.

“I think Vanya is particularly poignant for middle-aged people who suddenly think: ‘How do I find myself here?’ ” he says. “Nearly all the characters are suddenly brought to a point where they begin to ask themselves those life questions. ‘Why did I make that choice, why have I ended up with this person, where did the time go?’ ”

What is also important is the fact that this introspection strikes at a moment of enforced indolence. Like most of us, Chekhov’s characters start to brood when they are tipped out of their normal work routine.

“One misconception about Chekhov is that his characters were idle sort of people with not enough to do,” says Glen. “That’s certainly not what Vanya’s about. These are people who are usually very, very busy, and then something happens and they grind to a halt. It’s the arrival of this professor: the way he wants to live his life is completely at odds with the way the house has been run. Everyone is brought to a halt and in that halt starts to look inward to where they are.”

But while the frustration may be general, it is Vanya who is singled out in the title – and as “Uncle” Vanya. It’s an affectionate appellation, but not one designed to confer heroic status. It draws attention to the unfulfilled potential in his life: Vanya is not a father, grandfather, husband or lover.

“He’s only uncle to one person,” says Glen. “But he is that figure within the Russian household who kind of looks after things: the worker, the person who they could all depend on. He becomes unpredictable and undependable and inconsolable and it throws everyone’s world upside down.”
But does the play’s current popularity arise only from its timeless qualities? Or does this emotional tumult feel particularly pertinent for a 21st-century audience facing a precarious future and the loss of old certainties? Tuminas, director of the Vakhtangov’s Vanya, suggests that this might in part be true. “People nowadays are very desperate,” he says.

Tuminas describes a disorientation in Russia: “The main feeling is the loss of a dream. I agree with the great Russian philosopher who said that a country is defined not by its geographical location or by the language of the nation but by whether it has its dream or not. Liberty and democracy were once a dream for us but it hasn’t been eternal.”

Tuminas’s production is groundbreaking. Wildly physical, darkly comic and gleefully absurd, it dispenses with all the usual Chekhov furnishings. His characters rattle about on a near-empty stage, propelled by their feelings. “It’s a physical realisation that time is slipping through your fingers,” he says.

The American Richard Alger is co-director of Theatre Movement Bazaar’s Anton’s Uncles, which toured Britain earlier this autumn. He too feels the resonance of the panic in Chekhov’s play. “I think the idea of not fulfilling your dreams is very big in the Zeitgeist,” Alger says. Anton’s Uncles strips down the original, emphasising its wild fluctuations of mood. “You’re left with something very raw and that’s what’s appealing about his work,” he says.

It’s not just what Chekhov says that feels fresh then – it is how he says it. Recent English productions have shaken off the reverent melancholia of earlier stagings and embraced the emotional rawness and trapped, febrile energy in the play. When the characters soliloquise, we seem to listen in on their thoughts. Stott says this demands truthful delivery: “You have to be doubly careful to try and achieve that nakedness: stripping off a layer and showing the soul.”

Posner, his director, adds: “It’s not the plot that’s dynamic. The journey of the characters is the source of dramatic tension.”
In its earliest form, the play incorporated a suicide and a happier ending. But Chekhov changed this for a failed shooting and a more ambivalent ending: Vanya and Sonya return to their labours in a final scene that contains both solace and aching sadness. His characters may despair, but in the end they keep on keeping on. Less dramatic, perhaps, but far truer to most people’s experience.

In the end it is this profound, sympathetic honesty that speaks to us. “People always have the sense that life is just slightly better over there,” says Iain Glen. “There are very few of us who think, ‘You know what, I’m really happy right here: this is perfect.’ That’s not what we are. And that’s what Chekhov wrote about.”