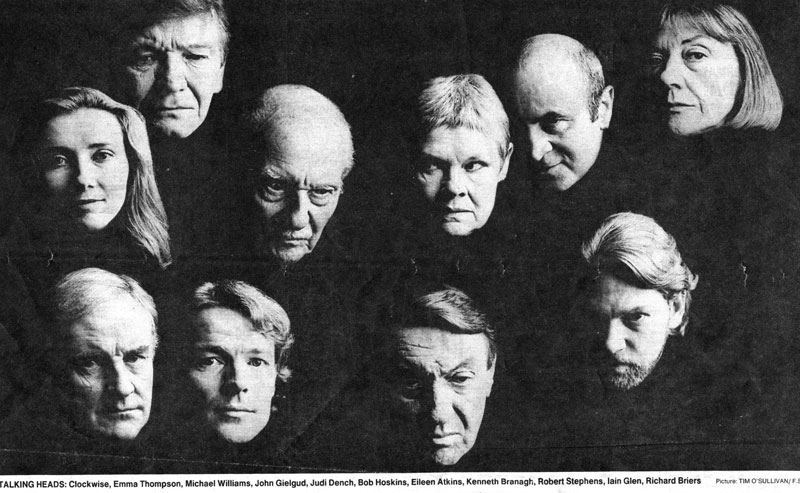 It was, without doubt, the largest gathering of egos since the Oscars ceremony. To celebrate the 90th birthday of Sir John Gielgud this Thursday, the cream of Britain’s acting talent assembled in a Maida Vale studio around the undisputed reigning monarch of our theatre.

The supporting cast includes Kenneth Branagh – organizer of the extravaganza – and his wife Emma Thompson.

Among the participants were: Bob Hoskins, Sir Derek Jacobi, Richard Briers, Eileen Atkins and Iain Glen. Robert Stephens begged for a part. Sir Peter hall settled for a minuscule role as a herald.

“I adore John,” declared Dame Judi Dench, who plays Goneril in the landmark production. “He gives no quarter to his age and he still likes to talk dirt.”

Ironically the man at the centre of all this fuss wanted to ifnore his birthday. “he doesn’t really want any celebrations,’ said David Fraser of BBC Radio. “He regards himself as a working actor and wants to continue for as long as he can.”

It was industry wunderkind Branagh who persuaded Gielgud into the joint BBC/Renaissance Theatre Company production.

“Then the red light went off and he immediately launched into telling the filthiest story. Back on went the red light and he switched back constantly to that gut-wrenching emotion. We went from the sublime to the ridiculous and back to the sublime in the twinkle of an eye.”

Sadly, Lear will be the last venture of Branagh’s Renaissance Theatre Company. Billed as the shining white knight of the British movie industry it has gone the way of so many other ventures.

But according to Sir Alec Guinness, Gielgud will still be around in the next century to oversee the art he has loved.

“Not all of us will survive to celebrate John’s 100th birthday in 10 years’ time,” said Sir Alec. “But I will bet my Equity subscription that he is upright, debonair and brilliantly tactless as he is now.”

Robert Stephans, whose own Lear stunned the critics at Stratford-upon-Avon was excited when he heard about the Gielgud tribute. “I rang up to offer my services,” he recalled. “I would have played a maid, maid the coffee – anything just to take part.”