You are here: Home / Press / The Scotsman (Glasgow Kiss) 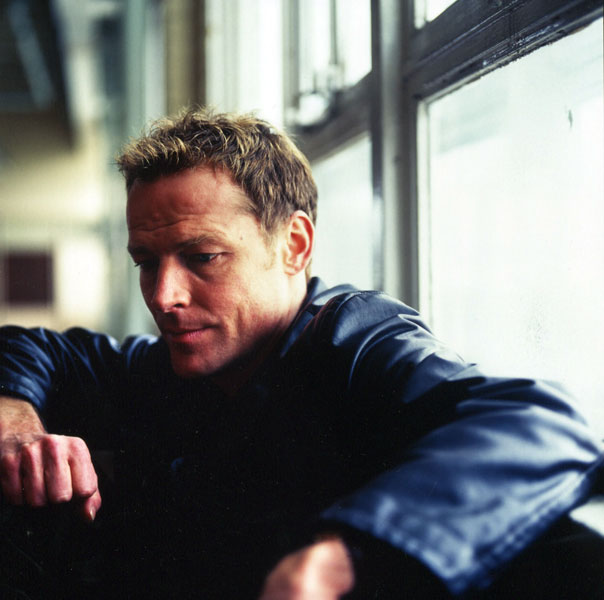 DEVIL IN THE GLEN.

He’s famed for taking on dark roles – but then Iain Glen has never been interested in the conventional.

Meeting Iain Glen is scary. All razor sharp cheekbones and muscled body, he writhes in his seat, meditating over questions. Any moment, he could strike, cobra-like, grasp your throat with his long, powerful fingers and slowly squeeze…

Of course, Glen is only that scary if you saw him in Lynda Plante’s Trial and Retribution, in which he played a slice-and-dice serial killer who, it was hinted, was Satan himself. Cold rage burned in his eyes. His body transformed into sinewed evil, he was chillingly mesmerising. Not the kind of man you’d want to be left alone with in an anteroom off a deserted restaurant with only a tape recorder to defend yourself with.

If you also saw him in the costume dramas Wives and Daughters and The Wyvern Mystery, you still might be uneasy, as he played men with secrets and secret agendas (though admittedly you might not be looking at his forehead and wondering what he’d look like with devil horns).

But even if you didn’t see him in The Blue Room with Nicole Kidman, You still wonder what he looks like naked. Doing cartwheels. This last thought effectively combats the fear he may otherwise provoke.

“I have done a few things that were on the extreme of human behaviour,” he laughs. “For Trial and Retribution, there was l lot of research inherent in the writing, but I did study serial killers and found that one thing that unites them is that they have very little guilt.

“They live normal lives and then this demon emerges. I remember when it was revealed Dennis Nilsen had severed heads and cut up bodies and there was a huge surprise at the Social Security office where he worked. They knew him as this amiable, quite shy guy, and there he was responsible for these terrible crimes.”

Glen is an astonishing actor. He goes from inhabiting and embodying one kind of character to another completely different one, being so convincing as both that you can only marvel at the depth and breadth of his talent, consistently demonstrated in the many major theatre roles he has taken on at the Royal Shakespeare Company or the Royal Court in London. He modestly attributes his talent to a “childish ability to imagine myself as someone else.”

“It’s about your capacity to say: ‘I will be this person and get inside them and allow it to play through me’. It sounds a bit pretentious but that’s the gist of it. I watch my four-year-old child and nothing excites him better than me saying: ‘Okay, now we’re in a submarine and we’re underneath the water and a shark’s coming.’ As an actor, you never really lose that childish ability.”

Glen says he finds it comfortable and therapeutic to inhabit a situation other than his own while under the media’s gaze. ” Any situation in which I am asked to be myself, like film premiers, I feel a little uncomfortable. I used to be much more neurotic about it, flattering myself that I had a bit of the Robert De Niro about me, but it’s actually a genuine thing – it seems nothing to do with what I do.” Hence the shifting in his seat and constant fidgeting. Nervous more than murderous.

Now, Glen is turning his “childish ability” to two parts which are yet another departure for him: they are ordinary blokes. In Anchor Me, the latest drama from Ashley Pharaoh, he plays Nathan, a disenchanted married man who falls in love with someone else. In Glasgow Kiss he is Stuart, a widowed sports writer bringing up his son and trying not to fall apart or fall in love. With a beautifully written script, from Glasgow-based writer Stephen Greenhorn, an exquisite supporting cast and the city of Glasgow as much a character in as a backdrop to the story, Glasgow Kiss will dispel any thoughts you had of Iain Glen as Satin in disguise.

Jane Featherstone, the producer of Glasgow Kiss, says she was instantly attracted to Glen for the part of Stuart. “He needed to be sympathetic, warm and vulnerable without being weak, but he also needed to be funny, and a man Cara [Glasgow Kiss‘s leading lady] could fall in love with. It’s a great challenge for an actor to get the balance right, but Iain’s performance has incredible strength composure and humour.”

She is right. But Glen attributes much of the strength, composure and humour to the writing. “It’s hard to find TV like this. It is a lovely piece of writing. To find something like this that has a very light touch, is comedic and very moving is a blessing.” He continues: “Anchor Me and Glasgow Kiss are about ordinary people and ordinary issues. Whether the people are dealing with bereavement or falling in love, there’s a normality about the life they are leading.”

Glen tries hard to make his own life as “normal” as possible, even when circumstances- and his career- conspire to make it extra-ordinary. “I miss picking my boy up from school and reading to him at night. But it goes with the territory. I love being a dad. I never thought about it before I was one. I thought, ‘God. Imagine me as a father. Poor child. But now I can’t imagine not being a dad. I adore him and I don’t want to look back and think I should have been around for my child and I wasn’t.”

“Apart from last year – and I don’t intend to repeat that – I think we spend as much time together as the average family who work nine to five. Even if you’re working hard, you can have a month or two free here and there. It’s a trade off. The key is having quality time, and the time we have is glorious. My boy doesn’t try and give out guilt at all; it’s not in his nature. I’d understand if he said, ‘You’re going away again’, but he doesn’t. He waves from the window and says, ‘See ya! Have a lovely time! See you when you get back.’ He is such a positive sweet sort, and maybe it would be harder if he wasn’t.”

Glen says that the benefits of the job cancel out the difficulties, while work also provides the resources that soften the blows that living the life of an actor deals. With his mum and dad, Finlay has traveled to America, Africa, Australia (where the family spent New Year on Tom Cruise and Nicole Kidman’s yacht in Sydney harbour with the Hollywood ‘ber-couple and the then only Oscar-nominated director Sam Mendes), France and Ireland.

“I think it’s enormously important you also make sure you have time as a couple. If you’re scrambling between feeling guilty about being away and concentrating on your child, that will be at the expense of your relationship. You have to make time for yourselves too, otherwise what would be the point of any of it?” The very thought of Iain Glen with devil’s horns evaporates. What an angel.