You are here: Home / Press / The Times (Hedda Gabler) 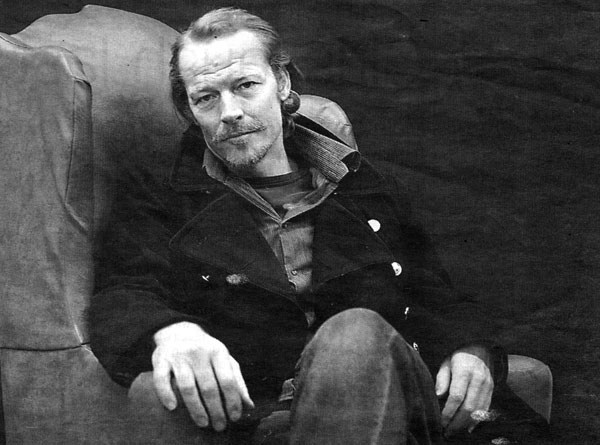 This 43-year-old actor is regularly referred to as a “Scots hunk”. Today, with his fair hair pulled back into a tiny, straggly ponytail and sporting a pointy-tipped moustache, he’s a little rough around the edges. But he has a warm, intensely masculine presence and a sharp wit. As he tilts his profile towards the light, facing the photographer the perfect angle without for one second allowing his attention to wander from our conversation, it’s not difficult to see what makes Glen one of our most magnetic performers.

We’re in the Almeida Theatre’s rehearsal rooms in North London to discuss Glen’s latest role, as Judge Brack in Richard Eyre’s new production of Hedda Gabler. Ibsen’s 1890 domestic tragedy is, as Glen puts it, “psychologically astute”, even when the characters’ behaviour is at its most extreme.

Glen is surprisingly reluctant to talk about how rehearsals are going because, he says, at this stage he genuinely doesn’t know. “This is always a vulnerable time,” he says. “Really you are clueless and searching and you don’t want to give any secrets away if you feel that you have had some kind of revelation.”

Nevertheless, he agrees to divulge what he has so far uncovered about Brack, a powerful and manipulative man who attempts to contrive a situation whereby he can conduct an affair with the newlywed Hedda and continue his friendship with her husband.

“He’s an enigma, and I was drawn to him because I feel he’s very open to interpretation,” Glen says. “He’s not untypical of a certain sort of man – he’s unable to commit to a married state, so he creates triangular relationships. There are men who can divorce, well, not exactly sex from love, but they can compartmentalise their lives. Yet Brack’s feelings for both Hedda and her husband are in earnest. It’s subtle and complex.”

Glen’s record as a classical actor is impressive. His RSC debut as Henry V won him comparisons to Olivier and McKellen, and he was a rivetingly febrile Edgar in Max Stafford Clark’s King Lear at the Royal Court.

More recently he starred in Peter Stein’s much-admired The Seagull in 2003 and blasted his way from under the shadow of Brando as a fierce wiry Stanley Kowalski opposite Glenn Close in the National Theatre’s 2002 production of A Streetcar Named Desire. The Blue Room (1998) directed by Sam Mendes in which he and Nicole Kidman played all ten roles sent the Donmar Warehouse box office into meltdown as the public clamoured to see them in David Hare’s update of Schnitzler’s La Ronde. Both actors gave scintillating performances – and the play’s huge impact had some unexpected knock on effects. According to Kidman, The Blue Room revitalized her career, it gave Glen a taste of celebrity life and a continuing close friendship with his co-star. But his relationship with Kidman came under less welcome scrutiny when their marriages broke down – hers, to Tom Cruise, in 2001, and then in 2002 Glen’s to the actress Susannah Harker, with whom he has a son, Finlay, now aged nine. There was no affair with Kidman, but that didn’t stop the speculation.

“It was difficult, but you have to handle it with good grace and move on,” says Glen whose partner now is Charlotte Emmerson, also an actress. “I mean, if I was taking my son to school and a photographer was there taking pictures, I don’t know how I’d react. Maybe I’d kick the living daylights out of him. But so far it’s never been bad enough to upset me. It’s part of the business.

Still, he clearly doesn’t relish it – one reason why he’s never likely to move to Hollywood. Besides, he says, there’s a much more satisfying variety of work here, where he can switch between film, television and theatre. “I like to spread myself quite thin. When I’m working I’m focused, but when it’s done, it’s done. I jump into the next thing.”

Right now, he’s on our screens playing the Jacobite rebel Alan Breck in the BBC’s Kidnapped. And RŽgis Warnier’s Man to Man, in which Glen stars as Victorian Scientist in search of the missing link, recently premiered at the Berlin Film Festival and is due for general release later this year.

“I’m someone who likes to get a lot done in a day,” he remarks. “I don’t think I’d have stuck with acting if I hadn’t worked pretty solidly. It’s so painful for actors who don’t work. If acting had meant I was just sitting around, I couldn’t have done it.” And with that he’s off. Let’s hope the acting profession continues to keep him busy.