You are here: Home / Press / The Weekender (Macbeth) 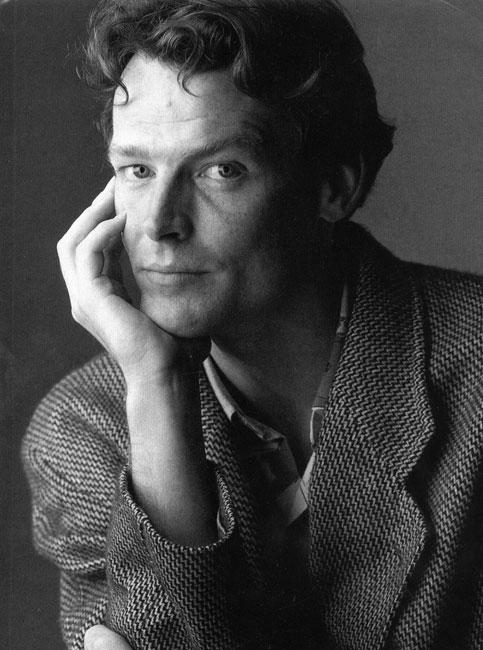 This is no Bragger I see before me. Iain Glen is not insecure, but he’s certainly not one to blow his own trumpet. Jackie McGlone goes in search of a fundamental talent.

Behold the Brothers Glen. How disparate they are. There’s Hamish who runs Dundee Rep and who talks such a good game and then there’s Iain who is a film star and who hates “crapping on” about himself. There is a third brother, Graeme, who is a merchant banker, but he is not on Weekender’s list of dramatis personae.

It is Iain who is the star of today’s page 5. Iain Glen, “the strong, silent type”. The Garbo of our days. Well, he certainly has the cheekbones for that particular piece of type-casting.

So here we are at the Tron in Glasgow, where 31-year-old Glen is rehearsing Macbeth. Tall, blond and good-looking, Glen is discovered, sitting alone with a paperback and a glass of water. Are we in for another intense performance of the thespian as angst-ridden interviewee? Will this be yet another Iain Glen conversation “Shrouded in silence”? Another of the actor’s famed “turns”, with him walking backwards into the limelight? Not so much fretting his hour upon the stage, as struggling and stuttering through the first of many interviews during his Mayfest sojourn in Scotland. I first interviewed Iain Glen two years ago when he was playing Hamlet at Bristol Old Vic. He had a throat infection and whispered hoarsely into my trusty tape recorder. When I played it back, only my questions were audible. The rest was silence. In Bristol, I had expected him to be hard going, but in the event he wasn’t. He was certainly nervous, wriggling about in his seat, running his hands through his hair, and constantly playing with the sleeves of his T-shirt, but eventually he chattered away huskily nineteen to the dozen. This week in Glasgow, he was just as fidgety, tugging at his facial hair – his Thane of Cawdor will be bearded – and tugging at his clothes, but the words fairly pored out.

So okay, Iain, let’s get this one out of the way. What is it with you, why do people have you down as such a “difficult interview”? Sometimes he wishes he could take it more in his stride, but, no, he doesn’t like enormously the idea of talking about himself. He is not remotely interested in developing a persona in which he trades. “There is no ‘Iain Glen’.”

“One’s ability to have an easy relaxed chat with a journalist bears no relation to what I, as an actor, am trying to express. I fundamentally believe that any talent one has as a performer has nothing to do with the way you behave in interviews. I’m a watcher, anyway. I’m a re-actor in company. I don’t guide conversations. I don’t sit down in the pub and say, ‘let me tell you a funny story’. I watch, I observe. I don’t feel I have anything particularly important to say. I don’t have very strong opinions about anything really. People give me their opinions to say, they write them down for me to act. I think I come from a neutral stance. I mean I do have opinions about things. Yes…no…of course I do, but other people’s words are just infinitely more interesting, especially if they are Shakespeare’s.”

Hamish Glen is more forthright. “Talking to the press makes Iain feel utterly nervous and inadequate. Actually, he isn’t at all introverted and shy and nervous, the way he sometimes comes across in interviews. He simply hasn’t got a clue what it is that makes him such a good, such an unashamedly powerful actor. When he is onstage he demands our attention because he is such a high-definition performer. He is very charismatic and has a really commanding stage presence. From the beginning, he very quickly mastered a steely-eyed, detached quality that equals menace, but his technique has now sharpened to the point where emotionally and psychologically he can turn on a sixpence. But Iain can’t talk about what he does onstage because he doesn’t know what he does or how he does it- it’s a complete mystery to him.”

Usually, Iain Glen is happy though to talk about the characters he’s playing, but look out, here comes the curse of the Scottish play. He doesn’t want to discuss Macbeth. He comes over all apologetic – “It’s just that it’s a bit like hamlet. In the end, I had to find my own way through. People like to hear conviction and surety and belief and understanding and what it is that one is up to, whereas I feel completely unsure and completely unconfident and completely at sea with what I am doing. I have no preconceived or pre-emptive notions about how I am going to do it. Things that are forming slowly one is wary of articulating because they are maybe not fully articulated for oneself.

“Things go off at all sorts of tangents in rehearsal, they change, they evolve. My feeling is let it come, let it happen.” The readiness is all? “Yes, I don’t want to rush at it and jump at it. I think I have confidence, no I don’t, it’s not confidence, but a need to let it slowly seep into me. I just want to keep running, keep playing, keep changing, keep trying to find…something,.”

Do not be deceived by all this hesitation and deviation and repetition, says the actor and playwright, Simon Donald, who was at Aberdeen University with Glen. “Iain is a really bright guy. We used to be in a band together, and then we joined the Dram. Soc. He’s smart, but he has this really odd brain, a completely left-field brain. He hated studying the academic life. He was just too restless. In fact, he was a failure until his talent became clear.” Hamish Glen says his brother’s concentration and commitment to acting grew out of finally finding something he was really good at.

Educated “forever” at Edinburgh Academy, Glen finally made it to Aberdeen University, where Hamish was also a leading light of the Dram Soc., after a year of determined retakes of his Highers. Two years into his English course he was playing Max in Bent on the Edinburgh fringe when word came that he had to re-sit yet another exam. A review appeared saying that his Max was better than Ian McKellen’s. Glen never went back to Aberdeen. Hamish directed him in a one-man show, If One Green Bottle…, and invited a top Scottish agent along. She immediately went round to the dressing-room and signed Iain up. Episodes of Taggart and various “tellies” followed, and there was little doubt that here was a major talent and a bit of a glamourpuss, to boot.

Although he was already embarked on a career, he decided to go to RADA for three years, where he was a contemporary of the likes of Imogen Stubbs. Jane Horrocks, and Ralph Fiennes. He left clutching the Bancroft medal to his manly bossom. “Suddenly,” says Hamish Glen. “he had found something he was good at and out of that grew concentration and commitment. I don’t think I ever thought he would be such a big star. Yet throughout out childhood” – their father is managing director of the Scottish Investment Trust – “I think he was always a performer, usually in fairly wicked ways, too.”

Glen told me in Bristol that he had long been “angry and destructive” in his youth, always acting in public. “Until I started acting professionally, I would feel myself filling up with this terrible self-destructive energy. At one point, I literally felt it was brimming over. I simply didn’t know what I wanted to do with myself.”

He knows now, though. Six years out of drama school and Glen had starred opposite Sigourney Weaver in Gorillas in the Mist, bedded Charlotte Rampling in Paris By Night, discovered the source of the Nile in Mountains of the Moon, played the cold-blooded, enigmatic gangster in the TV series, The Fear, won a silver Bear for Best Actor at the Berlin Film Festival for his harrowingly unforgettable performance as Larry Winters, the hard-man turned poet, in David Hayman’s Silent Scream, got the Evening Standard Award for Best Film actor, and the Best Actor trophy in the British Film Awards for Gorillas, Mountains, and Scream. He was last seen on television in Frankie’s House about a Vietnam war photographer.

There have been stage appearances at Bristol (he was a brilliant Hamlet), Birmingham, Manchester, the West End, and the Royal Court, where he has just played Edgar in King Lear, a performance Michael Coveney described in the Observer as being one of “Clarity and Intelligence”. Last summer he won golden opinions for his Tullus Aufidius in Kenneth Branagh’s Coriolanus at Chichester. He never stops working. After Macbeth, there will be a new, “Very funny” Michael Frayn play to be directed by Michael Blakemore at the Donmar Warehouse.

Meanwhile, commuters on the Edinburgh-Glasgow trains should ignore the pale, obsessive, worried looking bearded person poring over a script and muttering to himself. It’s just Iain screwing his courage to the sticking place, “having a bit of a think”, and preparing the first of many monarchs of the Glen.