You are here: Home / Theatre / Hapgood 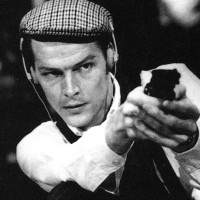 This is a metaphysical spy-thriller, intricate, elegant and lucid. People may never be what they seem, which is frustrating if your job is to identify them and heart-breaking if you happen to have a heart. In Elizabeth Hapgood and Joe Kerner, the heart is still beating: and felicity Kendal and Roger Rees play a highly charged duet in which a sense of loss and regret is kept under iron control by undercover efficiency. Not for the first time, the poignancy of Stoppard’s writing comes from the poetry of private pain beating like a wounded bird against the cage of intellectual ingenuity. Hapgood has no rival in London.

‘Hapgood’ is directed by Peter Wood and designed by Carl Toms À both working lightly and fluently. It is expertly played as an emotional striptease of boulevard comedy, a style which promises everything but conceals all.

The action is like an interlocking series of Chinese boxes and the ideas are expounded in intellectual arias. It is Stoppard’s most cunning play yet, precisely because it manages to link, almost subliminally, its various themes. Roger Kees as Kerner not only gets the scientific ideas across but also uses his nervy, staccato style to imply a character hopelessly torn between two cultures. And Nigel Hawthorne as Blair veils the character in light irony. Iain Glen as Riley, sounding off in a shooting range, neatly splits himself in two.

Felicity Kendal brings a formidable technique to her one, or two, roles. I enjoyed the portrayal of Ridley, suspect number three, by Iain Glen. The curious air of unreality he occasionally exudes is entirely appropriate.

It is expertly played as an emotional striptease of boulevard comedy, a style which promises everything but conceals all.