You are here: Home / Theatre / Here 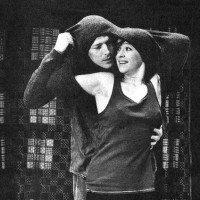 It’s a touching, brilliant construction. It’s both deeply thought and deeply felt. It works superbly in the intimate atmosphere of the Donmar. The acting is like Michael Blakemore’s direction: exquisite, hard, and precise. I should book soon if I were you.

Under Michael Blakemore’s sensitive direction the cast perform with distinction. Iain Glen and Teresa Banham make us understand what it is like to be so newly-planted in love one is forever digging up its roots of see how they have grown.

There are fine performances in the two main roles from Iain Glen and Teresa Banham: both of them are fresh and engaging, but neither of them tries to convert the play into the routine romantic drama which it isn’t. Brenda Bruce also scores as the disenchanted landlady who has seen it all before (not that she has necessarily got it right either), and Michael Blakemore directs the proceedings with the intelligence they deserve.

The acting is like Michael Blakemore’s direction: exquisite, hard, and precise.