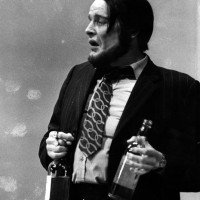 One of the more refreshing facets of our current disenchantment with the United States is that it now seems entirely fitting for a play about the Soviet Union to be an affectionate satire – a collection of in-jokes about an old and eccentric family friend. Two young men arrive in a Siberian town in circumstances which cause them to be mistaken for high-ranking nosy parkers from the Kremlin. The town leaders, needless to say, have used their isolation to pursue unhindered a career of cheerful corruption. The arrival of the “commissars” therefore causes mammoth consternation. Without doubt though the success of the piece is largely due to excellent playing by the Young Company. This is a talented group whose presence and assurance considerably belies their brief collective professional experience and undoubtedly owes much to the tight, yet unobtrusive direction of Derek Nicholls. Among a cast with no weak links, I enjoyed especially Devon Scott, who played Anna, wife of the town boss, and Timothy Watson who played Osip, the young hero of Soviet labour. Most of all though, I, together with most of the packed audience in this little arena theatre, was hypnotized by Iain Glen – less than a year out of RADA – in the comparatively small part of Dobchinsky one of a pair of bureaucratic side men. Mr Glen has clearly read Michael Green’s advice in The Art of Coarse Acting on how to steal a show in a walk-on part. He even got laughs moving the set around between scenes. Not, I hasten to say, that there is anything coarse about him, his characterization of Dobchinsky was a sort of manic amalgamation of Uriah Heep and Quasimodo with just a tough of Basil Fawlty. The whole sent the audience out into a cold night suitably warmed.

Ken Whitmore’s La Bolshie Vita at Birmingham Rep is delighting audiences with its witty and scathing look at the Communist State. Masterfully handled by the Rep’s Young Company, the play revolves around mistaken identity. Brilliant performances by Tim Watson as the stammering Constantinovich and Iain Glen as bumbling official Dobchinsky.

I, together with most of the packed audience in this little arena theatre, was hypnotized by Iain Glen. He even got laughs moving the set around between scenes.