You are here: Home / Theatre / The Broken Heart 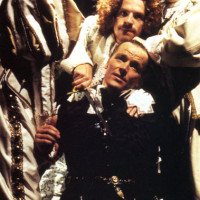 How wonderful to see a grand period piece in a superlative production which respects its style and its tradition with the most scrupulous intelligence. The setting may be ancient Sparta, but Boyd knows that this is essentially a Caroline drama. The atmosphere is both sultry and grand: a resplendent English baroque. Ford’s writing is both muscular and florid, shifting between passion, bombast, ribald comedy and blind rage, and occasionally stopping your heart with flashes of almost great poetry. Ford is portraying broken hearts: people who suffer, and contemplate their agony with a dark, doomed relish. This is the psychology of melancholy, in which pain is nourished with pride. The acting, clear and, so to speak, ornately classical, is first rate. Iain Glen is Orgilus, a proud, tortured man wounded beyond pride or shame. Emma Fielding’s Penthea is a study in blasted feeling.

Michael Boyd’s enthralling Royal Shakespeare Company production, greatly admired at Stratford last autumn, reaches London further improved. The memorable acting of Iain Glen and Emma Fielding as the lovers doomed never to have their fill of each other, or indeed to have each other at all ought to wring even metal-plated hearts. Emma Fielding’s magnificent, anorexic Penthea is a searing portrayal of female desperation. With pallid face, and in virgin-white dress, hair severely scraped back, she has the air of the determinedly hopeless. Iain Glen as the object of Penthea’s desire astutely identifies Orgilus as a man deranged, nursing his murderous schemes under a velvet cover of smiling affability. But there’s no missing his rage and pain either – as his voice quavers, shakes and breaks under strain. In fatal revenge he ranges from violence to gentleness, and ends up slithering in his own blood-bath. It is a spectacular but truthful performance, brimming with sardonic humor and emotional dynamism.

This is exactly the kind of play The Swan was designed to revive; and Boyd’s production memorable suggests that the power of stoicism derives from the intensity of feeling it conceals.

Glen is superb with Orgilus’s unstaunchable bitterness. Fully equal to the verse, which demands searching intelligence, he is vocally a model of eloquent variety – passion, sarcasm, obsequiousness and cold murderous glee. His lost Penthea is Emma Fielding, whose fine, ruined energy is very impressive. Melancholy, period-coloured music by Craig Armstrong sets the grievous tone with perfect tact. In timing and blocking, Boyd finds a lucid shape for the play (no mean task). We discover that The Broken Heart is actually a minor national treasure.

Glen is superb. Fully equal to the verse, which demands searching intelligence, he is vocally a model of eloquent variety – passion, sarcasm, obsequiousness and cold murderous glee.