You are here: Home / Theatre / The Man Who Had All the Luck 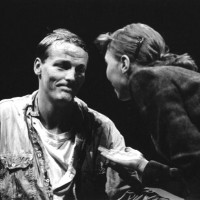 The Man Who Had All the Luck

The Man Who Had All The Luck (Young Vic) was written at a cultural and historical crossroads: In 1944, when America was about to win the war and stood firm as the moral leader of the civilized work. How time passes. The play flopped in New York not, I would guess, because of its quality but because of its quirky inspiration: for the young Miller was questioning the very success culture which had brought America to its glittering pre-eminence. This is a boisterous but ironical fairy tale, hard, lyrical and warm. The writing combines colloquial vigour and gripping theatrical intensity. Its few ragged edges have an irresistible charm. Paul Unwin’s direction catches perfectly Miller’s blend of wonderment, mockery and passion. Glen and Rudi Davies, playing with controlled, fiery intensity, lead an excellent cast full of tenderness, muscle and fire.

As seemingly inevitable catastrophes are stolen from him, Iain Glen’s Beeves begins to ride his luck with moral dread. It’s a mesmerising performance from Glen who bridges the transition from wide-eyed grafter to haunted cynic with irrepressible urgency.

It’s beautifully, sparely designed by Sally Crabb, and superbly acted by Iain Glen as the garage owner and Rudi Davies as a neurasthenic girlfriend/wife.

Already one sees in the work the germ of many of Miller’s recurrent themes: impotence, madness, endless Oedipal rivalries, But the script aside, the performance is wonderful.

It’s a mesmerising performance from Glen who bridges the transition from wide-eyed grafter to haunted cynic with irrepressible urgency.