You are here: Home / Theatre / The Seagull 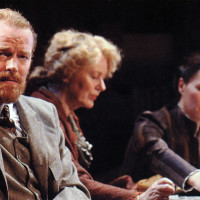 The Seagull is a big, beautiful, slow-burning, but finally rich and almost flawless piece of theatre, so profoundly entertaining that I felt I could happily have watched these characters evolve over days and weeks, rather than three and a half hours:This sense of dramatic space is magnificently reflected in Ferdinand Woerbauer’s set, which opens up the great expanse of the King’s Theatre stage so that even as the setting changes between acts, we can see the materials for the whole play spread out before us throughout the evening. Stein’s mysterious way with time itself, allowing it to ebb and glow at what seems like the speed of ordinary life, but with an added dimension of compelling intensity.

The acting across the whole ensemble is a sublime mix of understatement and melodrama, pinpointing the passions raging beneath the deathly civility of everyday life. You couldn’t ask for a better production.

Fiona Shaw presents us with a woman who is wreathed in actorly display yet is also in a state of nervous panic: This kind of behavioural detail extends to all the characters. Iain Glen’s Trigorin is a revelation in that, for once, we grasp that it is partly the novelist’s self-loathing that leads him wantonly to destroy Nina. When Glen talks of his “literary storehouse”, he beats his brains as if aware that he uses experience as a substitute for imagination. Jodhi May’s Nina, desperate for celebrity seduction, is like a bird walking naively into the waiting trap.

There is fine work from Charlotte Emmerson as a sharp, chronically depressed Masha; Paul Jesson as a touching Sorin; and Tom Georgeson, in magnificently unpleasant form as that most disobliging of stewards, Shanraev.

Glen exudes a magnetic charge, his ardour slowly burning through his cool slouch. Pennington’s performance is exceptionally fine-tuned as well, with the Doctor’s caring sagacity giving way to callous shrugging at the incurability of the human condition.

The Independent on Sunday, Kate Bassett

As AJ Weissbard’s slow-burning lighting draws ever gloomier, the tattered remains of Konstantin’s once-proud theatre look for all the world like a ship run aground, the dead bird beside it the most haunting of totems in this vivid, brilliant production of insight and profundity.