You are here: Home / Theatre / The Wild Duck 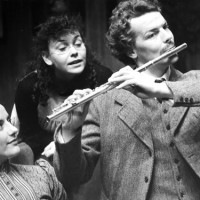 Clive Perry’s stylish production takes Ibsen’s delicate tragedy and gives it life and dimension in a way one can only admire. Mr Perry strips the veils from Ibsen’s characters urging us to move with him deeper and deeper into the lives of the Ekdal family, themselves riddled with guilt, failure and despair. The symbolism is handled with a naturalism which has defeated lesser actors and I salute the playing. In the capable hands of Devon Scott, Gina Ekdal is a beautifully realized performance with the power to suggest strength in stillness. Gina is the fulcrum upon which the family balances; when she leaves the stage you feel the terrors of the Nordic night closing in. It seems Iain Glen can do nothing that is not beautifully honed and significant. With his vain, petulant Hjalmar Ekdal, Mr. Glen adds to a list of fine performances this year. How this accomplished young actor suggests middle age is one of this week’s minor miracles. We must also admire Ian Macneil’s clever setting which turns the studio from wealth to poverty with great fluidity in seconds. The bad news is The Wild Duck is the farewell production of these young actors.

The Birmingham Rep’s Young Company have been a great success in their first season, tackling a variety of drama with skill, energy and a maturity beyond their years.

Birmingham Rep’s Young Company, under the direction of Clive Perry, give a gripping interpretation of Ibsen’s powerful jibe at missionary zeal and the cant and piety of which it is made. We cannot help but laugh at the self-deluding rhetoric of Iain Glen’s Hjalmar Ekdal, his shoes making fussy staccato statements on the wooden floor as he struts before wife and daughter, cocooned in the “life-lieî (Michael Meyer’s translation) he has woven for himself. Yet we also weep for his fragility, and the insubstantial base of character on which his self-security is founded, no match for the hurricane impact of Crispin Redman’s Gregers Werle.

It seems Iain Glen can do nothing that is not beautifully honed and significant.