You are here: Home / Screen / The Bad Education Movie 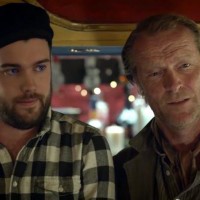 Mr Wickers and his class go on one final school trip after they finish their GCSEs.

I found myself laughing out loud. Iain Glen is brilliant. The fact that he has this wonderful face, that he looks like this weather beaten Cornish romantic fisherman/murderous rebel actually does tether the movie in some mythic way. You have this fantastic performance that is almost straight but is very funny as well.

Game of Thrones star Iain Glen is on scene-stealing form as a salty sea dog who believes a little too passionately in Cornish independence, and his character’s plans turn what was a by-the-numbers sitcom movie into something a bit more unexpected and ambitious. But it’s funny – oftentimes laugh-out-loud funny – with toilet humour playing its part, but rubbing shoulders with clever word-play, some good slapstick, homages to E.T. and The Wicker Man, a spot of social satire, and dick jokes. Lots of dick jokes.
Whitehall and co-writer Freddy Syborn make some unexpected narrative choices, director Elliot Hegarty directs in a style that transcends the show’s small-screen roots, and ultimately there are enough good jokes to make the feature a worthwhile endeavour.

Funny? Bad Education is unexpectedly hilarious, and that’s before the plot proper kicks in, with Whitehall’s Alfie Wickers becoming the leader of a toothless band of Cornish terrorists led by Iain Glen.
Written by Whitehall and the TV-show’s co-creator Freddy Syborn and directed smartly by TV’s Elliot Hegarty, making his feature debut, Bad Education is not by any means well-funded but marries a strong sense of comic timing with a visual ambition which knows its limitations. Unlike others of its type, this film isn’t at all harsh on the eye, and Hegarty makes playful cinematic references throughout which underscore the performances and some snappy writing.

I found myself laughing out loud. Iain Glen is brilliant