You are here: Home / Screen / Eye In The Sky 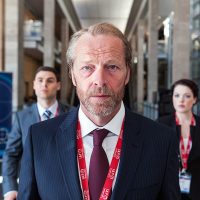 Eye In The Sky

Colonel Katherine Powell is a UK-based military officer in command of a top secret drone operation to capture terrorists in Kenya.

Through remote surveillance and on-the-ground intel, Powell discovers the targets are planning a suicide bombing and the mission escalates from “capture” to “kill.” But as American pilot Steve Watts is about to engage, a nine-year old girl enters the kill zone triggering an international dispute, reaching the highest levels of US and British government, over the moral, political, and personal implications of modern warfare.

Another premiere Friday night was the intense and absolutely fascinating new drone drama, Eye In The Sky, a different kind of war film that examines the costs of cyber warfare in this new age of battle. It is the rare war picture that deals with the morality in the acceptance of collateral damage in exchange for the opportunity to take some “most wanted” off your to do-in list. Helen Mirren is superb as a no-nonsense colonel in London running a top secret drone operation that quickly escalates from a ‘capture’ mission to one where several could be killed including an innocent little girl selling bread right outside the targeted compound which is housing a couple of suicide bombers. Aaron Paul is the American drone pilot who seriously questions what they are doing. Alan Rickman and a great supporting cast including Barkhad Abdi are all excellent. This one is from Gavin Hood, an Oscar winner for Best Foreign Film for Tsotsi, and proves he has a hell of a directorial talent by really building almost unbearable suspense as this story plays out. What a movie.

The messy complexities of drone warfare trigger command decisions, moral crises, collateral damage and cover-your-backside buck passing in “Eye in the Sky,” a rivetingly suspenseful drama that deftly intertwines elements of ticking-clock thriller and tragic farce. Director Gavin Hood and scripter Guy Hibbert (“Five Minutes of Heaven”) resist giving their material the extra push that might have transformed the movie into a flat-out black comedy. But much like “Dr. Strangelove,” the Stanley Kubrick classic it often recalls, this teasingly hard-to-label war story has more than a fair share of scenes that generate explosive laughter — until the laughter catches in your throat. Steely-eyed Col. Katherine Powell (a fiercely persuasive Helen Mirren) oversees Egret, a meticulously planned operation aimed at capturing a radicalized young Englishwoman who has joined Al-Shabaab terrorists for a conference in a quiet corner of a densely populated Nairobi neighborhood. When high-tech surveillance reveals that the wayward Brit, a similarly radicalized U.S. national, and their Al-Shabaab allies are readying suicide-bomb attacks, Col. Powell thinks the objective should be changed from “capture” to “kill.” Lt. Gen. Frank Benson (Alan Rickman), her superior, readily agrees that requesting a missile assault by a U.S. military drone is the correct course of action. Trouble is, while Powell impatiently awaits final approval in her war room, Benson is quite literally surrounded by second-guessing politicos who fret over legal repercussions — and, more important, public reactions. Here and there throughout “Eye in the Sky,” Hood and Hibbert sprinkle humanizing character quirks — Benson worries about buying the right doll for his child; the U.K. foreign secretary (a fine seriocomic turn by Iain Glen) is impeded by a bout of food poisoning — to counterbalance the ever-increasing suspense with comic relief. But the humor is far subtler, and much darker, during stretches when the movie is deadly serious. The ensemble cast is exceptional across the board. Purely on the level of a crackerjack political thriller, “Eye on the Sky” is hugely entertaining, with razor-sharp editing by Megan Gill

A hell of a nail-biter.

A terrific drama ensues, the military pressing for immediate action, the lawyers debating, the politicians (Iain Glen plays the Foreign Secretary) endlessly referring the decision upwards. Far from suggesting drones are being irresponsibly used, this thriller makes the ordering of a strike into a matter of tormented conscience. Brilliantly shot and edited, with another great performance by Barkhad Abdi as a pro-Western Somali agent on the ground, Eye in the Sky is compelling.