You are here: Home / Screen / My Cousin Rachel 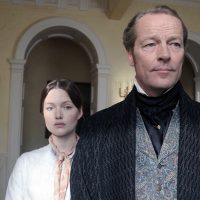 A young Englishman plots revenge against his late cousin’s mysterious, beautiful wife, believing her responsible for his death. But his feelings become complicated as he finds himself falling under the beguiling spell of her charms.

My Cousin Rachel is a highly enjoyable mystery thriller of the sort that modern communication and the internet have made impossible to set in the present day. Based on the 1951 novel by Daphne du Maurier, and adapted and directed by Roger Michell, it is a fantastically preposterous psychological drama featuring a lush score from Rael Jones and a tremendous lead performance from Rachel Weisz – who is mean, minxy and manipulative. Her sheer charisma persuades you to overlook one or two plot glitches. I can only describe this film as the roistering missing link between The Talented Mr Ripley and Far from the Madding Crowd.

Sam Claflin plays Philip, a moody young man of means in the 19th century, always grumping about the place with his dogs and his horses, pretty short-tempered with the Hardyesque gallery of estate workers. He is, moreover, disagreeable about women, whom he regards as an alien race, despite the fact that the lovely young Louise (Holliday Grainger), daughter of family lawyer Mr Kendall (Iain Glen), is plainly in love with him.

Philip lives in the rambling Cornwall estate in which he was brought up as an orphan by his adored older relative Ambrose (also played, in flashback, by Claflin). But Philip is now de facto master of this huge and neglected house since Ambrose died, having ironically gone abroad to Italy for his health and there fallen in love with and married a woman he once described in ecstatic letters home as his “cousin Rachel”, and by that token Philip’s cousin, too. But later missives show him to be afraid of this Rachel who had apparently become sinister and grasping. His death was put down to a brain tumour, though Philip suspects something else.

Rachel causes uproar by showing up in Cornwall on a visit, in full mourning black. Due to some legal technicality, she actually has no claim on the estate – yet. But with her bewitching beauty and feline sexuality, combined with a seductive air of tragedy, it looks as if Rachel has secret plans. She is about to eat poor goggle-eyed Philip for breakfast.

Just as in Du Maurier’s other books, Italy and southern Europe generally stand for the buried passion deep within the rainy English soul, the fiery id suppressed in the workaday English world and released on holiday. (“Going to Venice” was Du Maurier’s private code for having a gay sexual adventure – an important tool for understanding her story Don’t Look Now and Nicolas Roeg’s movie version, and not irrelevant to My Cousin Rachel.)

Weisz owns the screen as Rachel: it is a theatrically self-aware performance, encased in shimmering black, an outfit occasionally accessorised with jewellery to which Rachel is not entitled. In an early spasm of rage, and before he has laid eyes on her, Philip demands to know from a servant what Rachel looks like and if she has a moustache. The answer to this ungallant question is of course no, but there is something dark and sensually hirsute about Weisz’s presence, mixed with an insolent confidence in her bearing. She effortlessly wins a round of gamesmanship with Philip when first arriving in his house, succeeding in making him feel uncomfortable, when he had decided to make her squirm. Her success is amusing and obliquely erotic.

As for the way the narrative pans out, that will need some indulgence that the film has more or less earned with its storytelling verve. The audience is entitled to ask what importance Rachel’s cousin-hood or cousin-ness has, given that it is emphasised in the story and featured in the title. They may or may not be satisfied with the outcome. I was.

Weisz is a great villainess, a character who uses the promise of sex and the actual activity of sex for her own ends and yet keeps alive the possibility that she isn’t what we suspect. The final long-shot of Rachel and her horse is another allusion to Hardy, with an entertaining frisson of the macabre.

There are some fine character performances too, notably from Simon Russell Beale as a very fussy and conscientious lawyer (“That’s my job, to stickle”) and from Iain Glen as Kendall’s seemingly devoted and solicitous guardian.

Rachel Weisz and Sam Claflin are superb in this dark Victorian thriller.
The intellectual detail in all this is fascinating. Rachel is a feminist trailblazer, joyfully, deliciously in control of her life, and driving through 19th Century patriarchal society like a wanton black bulldozer. Michell, the director, regularly needles the class system and pillories Philip’s sense of entitlement (he can’t imagine why Rachel would not marry him), and consistently delivers some very ballsy Hitchcockian references – a staircase strangulation scene feels as if it were lifted directly from Hitchcock’s thematically similar Du Maurier adaptation Rebecca.

When was the last time we saw a really good adaptation of a classic British novel on the big screen? It feels like long time and maybe that’s why My Cousin Rachel, based on the novel by `Daphne Du Maurier feels like such a treat. It is handsomely crafted and filled with intrigue, leaving you constantly guessing whether the mysterious Rachel is a victim of narrow twisted minds or a scheming minx whose wickedness knows no bounds.
Intriguing to the very last moments, My Cousin Rachel follows you out of the cinema and into the daylight, teasing with the possibilities of what was really going on and who was ultimately responsible. A fine period drama and a welcome alternative to a summer of mindless blockbusters.

There are some fine character performances too, notably from… Iain Glen as Kendall’s seemingly devoted and solicitous guardian.