You are here: Home / Screen / Paris by Night 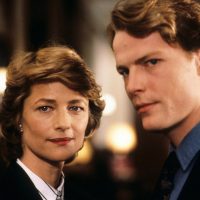 Clara Paige is a Tory member of the European parliament, who lets absolutely nothing get in way of her ambitions.

She is convinced that her ex-business partner Andrew Ray is blackmailing her. Upon accidentally meeting Ray, Clara impulsively murders the man. In a deliciously ironic turn of events, she is approached by Ray’s daughter who hopes that she’ll help her locate her missing father. Clara eventually finds out Ray had been innocent all along, but a greater shock awaits her at the hands of her long-neglected husband.

Hare avoids preachiness, thanks largely to taut, sparse dialogue and brooding visuals from cinematographer Roger Pratt. It’s near impossible not to be drawn into the unfolding intrigue.