You are here: Home / Screen / The Fabric of You 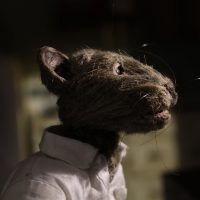 The Fabric of You

‘The Fabric of You’ is a stop motion, animated short film written and directed by Josephine Lohoar Self.

Set in the Bronx, in the era of 1950s McCarthyism, everybody wants to look the same. Michael a gay, twenty-something-year old mouse, hides his true identity while he works as a tailor. When Isaac enters the shop one day he offers the escapism and love Michael craves. In Michael’s confined apartment, he becomes tormented by the memories of Isaac’s tragic death. Michael’s memories and flashbacks are triggered when he notices Isaac’s jacket draped on the back of a chair. Haunted by the solace Isaac once offered, he struggles to come to terms with his loss.

Self tells the story as visually as she can, with minimal dialogue. The editing is full of beautiful visual links that tie the past and present together as the film drifts between the two. The design of the film gives the viewer a sense of a dark and dreary cityscape and populated by characters in trench coats, some of whom have companions, others searching for a place to feel safe. The confined apartments provide little relief.

Self’s film is a beautiful and aching piece that showcases two strong performances from its vocal cast as well as the mice we look at, which, we often forget are the work of many animators working many hours to get it right. I suppose when you don’t notice the animation, that’s sometimes when it works best, and “The Fabric of You” works wonders in unexpected ways.

A beautiful and aching piece that showcases two strong performances from its vocal cast.