You are here: Home / Screen / Jack Taylor: The Guards 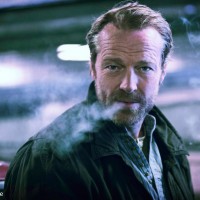 Set in and around Galway on Ireland’s rugged western coast, Ken Bruen’s bestselling novels leap to life in this series of TV movies featuring the straight-shooting, big-hearted Jack Taylor.

He used to be a cop with a minor drinking habit. Now he’s a private eye with a major habit for getting into trouble. Still reeling from the global economic crisis, Galway offers the perfect backdrop for criminal activity. And for those untouched by the economic downfall, there’s still enough criminal energy fermenting since the 60s and 70s, when the traditional social and political fabric of Ireland came apart, leaving rifts that still plague the country today. Taylor’s cases reflect these upheavals, and lead him to the very abyss of human malevolence and evil…

The Guards is the opening film. When beautiful Anne Henderson comes into Jack’s local pub and asks him to find her missing daughter, he is taken into the seedy underbelly of Galway’s middle-class. Four girl’s bodies turn up in the river. Jack’s paratrooper friend Sutton washes up in Galway too. And when Jack’s surrogate father and barman dies in mysterious circumstances, everything he believes in begins to unravel, making Jack question those closest to him.

WHEN you visit much of Ireland, it’s easy to sense the wariness its novelists once wrote about, which came from years of answering questions usually posed by a soldier with a pointed weapon, though seemingly it was non-existent in the gorgeous university city of Galway when I visited a few years ago. I found it a place of civic facelifts, new luxury apartments, refurbished hotels that shimmered like mirages, where even the tinkers had moved from caravans to houses, set amid ancient views, soporific and mesmerising.

In Ireland, they reckon the greatest sin is to have ideas above your station, to “lose the run of yourself’’. Galway, when I was there at least, was full of self-esteem, confident, smart and a bit raffish. As with so much of Ireland then, the new exploded with colour, energy and folly.

How wrong I was, the whole caboodle undermined in recent years by the European economic downturn and a black underbelly firmly entrenched, to judge by this great crime series being revived tonight. It’s based on the novels of acclaimed Irish crime novelist Ken Bruen, whose overriding preoccupation is the dark side of Ireland’s recent economic prosperity and the legacy it bequeathed, as well as the death of the old ways.

Bruen’s central character is Jack Taylor, a Galway Guard-turned-PI, played by Scottish actor Iain Glen, husky-voiced and red-eyed from drink, one of the most enjoyably irresponsible characters doing the mean streets. In the series’ first episode “The Guards”, Anne Henderson (Tara Breathnach) comes into Jack´s local pub to ask him to find her missing daughter after the bodies of three young women wash up in the river. The word is suicide but Henderson fears one of them may be her daughter. Before long, Jack is submerged in the grimy secret lives of Galway´s outwardly respectable middle-class citizens, teaming up with an old paratrooper mate, though, like many boozers, he’s hardly a good judge of character.

For me, one of the delights of the series is the Galway accent, which is full of a love of words, for their sounds.

Starring the charismatic Iain Glen and stylishly shot amid Galway’s starkly beautiful landscape, this gritty fast-paced series had me gripped from the first episode. With his rugged, lived-in face, heavy drinking habit, and hard-grained integrity, Jack Taylor evoked Raymond Chandler’s classic privet-eye antiheroes, but with a unique Irish flavor. This is a totally compelling production, of the very highest quality.

The ever watchable Iain Glen stars as hot- headed policeman turned private investigator Jack Taylor in the first of a series of feature- length dramas based on the books by Ken Bruen. Having been kicked out of the Garda – Ireland’s police – for punching the lights out of a government minister, Taylor’s scratching a living when we first catch up with him roaming the streets of Galway. Or, roaming the pubs to be more precise. Taylor’s fondness for a drop of the hard stuff means his judgment’s a touch wobbly in a case involving an old artist mate, a missing teenage girl and a glamorous woman interested in taking down his particulars.

THERE is a new TV investigator on the block. Not quite the “new kid” as actor Iain Glen is now in his middle youth but Jack Taylor (Channel 5, Thursday) is undoubtedly a contender for one of the hardest private eyes we’ve seen on the television. Ray Winstone would even run away from him.

This new series brings Ken Bruen’s hard-boiled detective to the small screen. Jack Taylor (the always excellent Iain Glen) is a disheveled boozy detective with a soft side, who takes on cases that the Garda won’t touch. Tonight’s opener introduces us to the dark, seedy underbelly of Galway as Taylor goes on the hunt for a missing girl.

One of the drawbacks of the current fad for moody European crime dramas is the subtitles. If you don’t speak a Scandinavian language, you’re going to spend half your time following the words at the bottom and not enjoying what the writer, director and actors want you to be enjoying further up the screen. The splendidly rain-soaked Jack Taylor : The Guards offers fresh hope, with a series of English-speaking crime stories (based on the Ken Bruen novels) set on the far western edge of the continent, in Galway. Centre stage is a gumshoe every bit as hard-bitten as the wettest, chilliest Swedish policeman, the eponymous Jack Taylor (Iain Glen). . . Jack’s city comes over as one just clinging on to Europe by the tips of its fingers, forever blasted by Atlantic gales, biting recessions and assorted scandals. The latest pulled Jack in when his old mate, Sutton, an ex-paratrooper, sailed into town, seemingly now making a decent wage as a rather bad artist. There were of course a few things fishier than Sutton’s paintings going on in Galway at the time, not least a string of young girls apparently committing suicide by drowning in the same spot and a mysterious wealthy woman who’d hired Jack to look for a daughter who didn’t seem to have existed. A plot thicker than Jack’s mum’s Irish stew saw the sleuth pitted against businessmen, police and, finally, close allies, although in the best of noir traditions Jack’s most formidable foe was always himself.I’ve never been sure what the Gaelic word craic means. It seems to be a concept for the walls of fake Irish pubs and ads for the tourist board. If, on the other hand, it means utter absorption in something thoroughly entertaining, Jack Taylor’s your man.