You are here: Home / Screen / The Young Americans 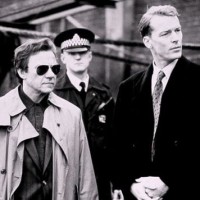 John Harris, an American drug enforcement officer, is asked by London police to help them in cracking an organized drug ring.

The syndicate is run by a ruthless young American who turns disaffected young Britons into hardened criminals. The gang has gunned down a well-known mobster and supplies cheap heroin to dance clubs all over London. Harris hooks up with British police officer Edward Foster and they discover that the drug ring is just a small part of a huge international mob. They recruit teenager Chris O’Neill, a club-land barman eager for revenge after the murder of his father in the latest legacy of gangland violence. As they edge ever closer to the kill, London braces itself for a bloody battle in which the young suspects may ultimately become the victims.