You are here: Home / Press / Daily Telegraph (The Blue Room) 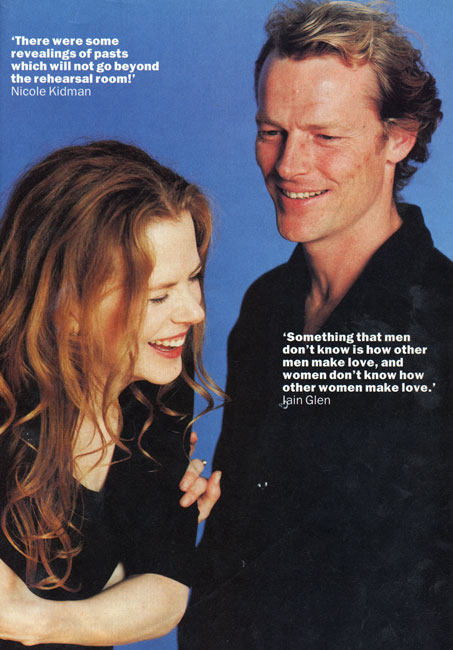 In a Rehearsal room somewhere in south London Nicole Kidman and Iain Glen have been telling each other secrets that will never be revealed to Oprah Winfrey. They are rehearsing David Hare’s The Blue Room, a free adaptation of Reigen by Arthur Schnitzler, known more commonly as La Ronde, since the classic 1950s film by Max Ophuls.

Set in turn-of-the-century Vienna, La Ronde reveals a chain of sexual affairs moving up the social ladder and down again: a tart meets a soldier; the soldier meets a maid; the maid meets and student; and the student a married woman, and so on. In the final scene, a count wakes up in the room of the tart: thus La Ronde is completed. Sexual attraction leads to copulation, often followed by melancholia or brutal indifference.

Schnitzler, a Jew who studied medicine and psychoanalysis as well as being a writer, secretly passed the original around his friends, apparently never intending it to be performed. It was finally produced in the supposedly libertarian city of Berlin in 1920, to an outcry – much of it anti-Semetic – followed by persecutions. When the play came out of copyright in 1982, there was a superabundance of productions but since then just the odd rustle of sheets on the fringe.

With her husband, Tom Cruise, and her two adopted children, Kidman has been in London for the past 18 months, shooting Eyes Wide Shut directed by Stanley Kubrick. Since all involved have signed a confidentiality agreement, only tantalising details have slipped out of the tortuous shoot. Rumours of a plot involving drug-addiction and cross-dressing are rife on the Internet, and this week a US release date of July 16 1999 was at last announced.

While here, she’s been a frequent visitor to London theatre in general, and the Donmar Warehouse in particular, and now becomes the latest film star – following Juliette Binoche, Kevin Spacey and Liam Neeson – to try their luck on the London Stage. Two questions immediately come to mind a) can she act? And b) why on earth would she want to do such a thing?

The first she must be used to, having herself protested that she is best known as Mrs Tom Cruise. The underwritten part of Isabel Archer in Jane Campion’s The Portrait of a Lady may have been disappointing, but there’s no doubt about the sharp perfection of her performance in Gus Van Sant’s black comedy To Die For, in which she played Suzanne, an ostensibly sugary, in fact ruthlessly ambitious, weather forecaster.

Having been mesmerized by Suzanne’s bouffant locks and delicately raised eyebrow the night before, I hardly recognize the gum-chewing streak of beauty who walks into a London club, tall and tousled in a pencil skirt (unlikely gear for a rehearsal and a waist so thin Kate Moss could lent her a pound or two.

It’s much easier to connect Iain Glen, the sandy-haired actor who follows her, with the man who carried the weight of Martin Guerre on his shoulders, and who a couple of years ago, was a memorable touching and troubled Henry V.

Coincidentally, Eyes Wide Shut is also based on a piece by Schnitzler, which should have made Kidman want to bury her head in a Sachertorte when Sam Mendes, artistic director of the Donmar, approached her. It didn’t because, she explains, “Eyes Wide Shut was so far removed from the original, Stanley never even suggested we should read it.” Mendes also made it clear that David Hare would be producing a free adaptation. “He wanted just two actors, each playing five characters.”

The decision to perform at the cash-strapped Donmar has caused a few ructions. “My agent went, ‘You’re doing what? For how long?’ No doubt, they were rapidly working out their percentage on £250 a week. They used to try and tell me what to do, but now they’ve given up. I’m a lost cause. I usually call and tell them what I’m doing.”

Kidman emphasizes that she has not been calling the shots at the Donmar, nor were leading men paraded for her to choose her partner. “I don’t like that. I think you let the director do his thing. Sam is really good at casting and I don’t want to interfere. Not,” she says with a laugh, ” that he offered me the chance.”

Iain Glen got a call from Mendes in New York five weeks before rehearsals started. He was sent the adaptation, and wanted to do it immediately. He admits, however, to some trepidation at his first meeting with Kidman. “It’s the sort of play where if there was any difficulty between us, it would be a nightmare. When we met, my antennae were so alert. I was thinking, ‘I just hope she’s not a weirdo, or going to be difficult.’ But we got over that quickly.”

Hare has made radical changes to the original play, beyond those involved in updating it, moving it away from Vienna, changing the title and writing it for two actors. The updating must inevitably mean a change in the attitude of the female characters, who (apart from the actress character) are as keen to go to bed as the men, but are more reluctant to say so.

Questioned about the title, both actors pause.

Kidman: “We should have Sam here. We’re hopeless. Go on Iain.”

Glen: “I suppose in La Ronde there’s a sense that you come into the world and the world is ongoing, it’s spinning. You get on to the merry-go-round and then you fall off. The notion of the Blue Room, is that it’s the place in which you are isolated if you choose not to commit to relationships. If you don’t try and evolve with people, and get on the merry-go-round, then you are isolated in the blue Room.”

Kidman: “I think that’s where David’s adaptation differs, in that he is saying ‘Get on and participate. Live and learn.’ The play also deals with the way your past is brought into each encounter.”

During the glut of productions of La Ronde in the early Eighties, there was some disappointment that the play didn’t rise to the occasion, a series of encounters, each one a mini-playlet, became repetitive as the evening progressed. By all accounts, the most impressive production was by Mike Alfreds for Shared Experience, with the voluptuous Pam Ferris. That, too, used only two actors, and was the celebration of acting that Mendes is aiming for.

Crucial to the play is a sexual rapport between the actors, something neither of them, initially, is keen to discuss. There’s a moment of nervous laughter.

Kidman: “Look at the way we are both sitting with our arms crossed.”

Kidman: “It’s hard, though, playing five characters and having to relate differently sexually to each other as those five characters. You have to be extremely specific about it.”

Glen: “You have to be hard on yourself. When you do get comfortable physically, you tend to drift towards being yourself. You say, ‘Okay, I’m comfortable with this, so I’ll be Iain, – and actually we’ve got to try and create 10 different sexual encounters with five different characters each.”

There must have been some interesting conversations in rehearsal.

Kidman: “There were some revealings of pasts, which will not go beyond the rehearsal room!”

Kidman: “We really had to look into that.”

Glen: “It’s really important because it mustn’t be flabby and loose. It has to be very real and it has to be, at times, very sexy.”

Glen: “Well, funny and messy and whatever.

Will Cruise and Glen’s wife (actress Susanna Harker) be able to cope with their stage rapport?

Glen: “I think we’ll get them in early.”

Kidman: “It is different to film, though. In film it’s edited and all put together. You can sit there together in the audience and watch it, and say ‘Oh, it was a terrible day. I hated doing that. I hated kissing him.’ In the theatre, it’s really in your face. But I think they are both pretty secure.”

Glen: “Sam had this clever thing at the beginning that whenever we were supposed to kiss, we just held hands.”

Kidman: “To find out who had the power, who would make the first move.”

Glen: “To suggest what type of kiss it might be.”

Kidman: “We carried on like that for a while.”

Glen: “And then one day we just forgot to put our hands up.”

Kidman: “And now we’ll kiss for you right here!”