You are here: Home / Press / The Stage (The Crucible)

The Stage (The Crucible) 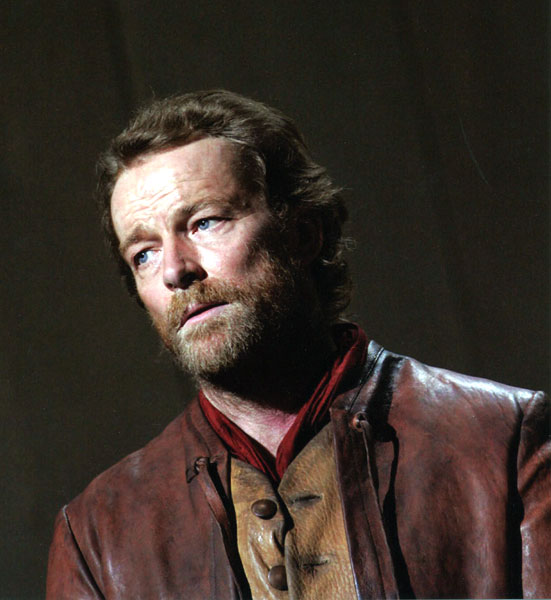 For an actor who is equally happy on stage and screen, Iain Glen is fortunate enough to have a foot in both camps. He tells Nick Smurthwaite about his current role in The Crucible with the RSC

If a British actor is young, good looking, talented and sexy, we tend to assume it is only a matter of time before he gets into movies, preferably American ones, since that is where the money and the kudos reside.

Think Jude Law, Paul Bettany, Sean Bean, Orlando Bloom, all of whom spend their working lives hopping across the Atlantic.

The mystery of Iain Glen, who ticked all the boxes when he burst on to our TV screens in the late eighties as a white collar thug in The Fear, is that big-time celluloid success seems to have eluded him, even though he has continued to amass a formidable body of stage and film work for which he is hugely respected.

In a publicity-shy tradition of Tom Courtenay and Michael Kitchen, Glen is a quiet, self-effacing man who just wants to get on with the job, never mind all the media bullshit, and then ride his bike home to the anonymity of suburbia when it’s all over. He has no interest in living the life of a movie star.

Getting to know Nicole Kidman and Tom Cruise during the London run of The Blue Room in 1998, was clearly an eye opener. He recalls Cruise saying, of being in the public eye: “For every door that is closed to you, another door opens. But as Glen points out, it seems a curious equation to have the wherewithal to charter a private jet when you can’t walk down Oxford Street without being mobbed.

Glen prefers to be able to push his trolley around Sainsbury’s untroubled by the celebrity circus. “I hope I’m not precious about it, he says. “I mean, if Ang Lee or Martin Scorsese came knocking at my door, I’d be off to the States like a shot. But I never did that thing of moving to Hollywood just to speculate. I’ve done my share of shite but I try and keep it to a minimum. Besides I don’t think I’d be very good at doing most big commercial films, I’d probably fall flat on my face. What I want is to have a degree of choice and to do things that challenge me.

He has made more than 20 films many of which have received accolades at European film festivals. “When films get made beneath a certain budget it usually means that the director has control, unfettered by studio influence. My experience is that they offer actors some of the most satisfying work even though they may be perceived as not being big box office.

But currently Glen is playing John Proctor in The Crucible, universally acclaimed and surely destined for award recognition. One critic called it “the most commanding performance of his career. Typically perhaps, Glen talks about his preparation for the role as if he were describing the run-up to the best man’s speech at a wedding. “If you’re intimidated by previous performances in the role, you may as well stay at home. I don’t have any particular method, I just read the play again and again to get the lines into my head. It’s a huge bonus when a play is as well crafted as The Crucible.

If he does get stressed out by these big theatrical challenges he is not the sort of bloke to show it. Indeed, he prides himself on staying cool, calm and collected for the good of the company, as well as the audience. “You can’t let nerves come between you and the audience because they pick up on it. My way of dealing with the stress is to become very calm and relaxed, even when inside I’m not feeling that way at all.

This cool exterior must have been sorely tested during the run on Martin Guerre in the mid-nineties. Playing the eponymous hero in the Boublil-Schonberg musical for a year was, he recalls, “bloody hard work and not a little frustrating, From the outset, Glen and the producer Cameron Mackintosh disagreed about the basic matter of whether or not the mysterious Martin Guerre was who he said he was. “I told Cameron what I thought and he had a very clear counter-argument. He felt that in musical theatre the audience needed to be in the know. The other characters wouldn’t but the audience would. It allows the music to fly otherwise the evening would become muted and not suit the composers. He may well have been right. I felt it undermined the suspense to give away the secret. In the end he was the producer and my boss. Besides, I had my work cut out trying to sing on stage with a 20-piece orchestra. That was enough to think about.

Growing up in Edinburgh in the sixties and early seventies, Iain Glen had no thoughts about being an actor or anything to do with showbusiness. “I had always struggled academically and I was quite distracted in my teens, to put it mildly. I was all over the place. But when I finally got into Aberdeen University I discovered drama and that changed everything. The first role I played was Marshall Herrick in The Crucible. I’d had no connection with or interest in drama prior to that. I just loved the idea of pretending to be someone else, putting on other clothes, speaking eloquently – possibly because I was so ill at ease with myself at the time.

By the end of his second year at Aberdeen, Glen and his fellow thespians were importing shows to the Edinburgh festival and he had made up his mind that he wanted to do drama.

“My family were quite skeptical at first but they soon came round to it when they realized how committed to it I was. I took it all desperately seriously. At my audition to get into Rada, I practically got down on my knees and begged the principal to give me a place.

When Glen left Rada in the mid-eighties, equipped with the Bancroft Gold medal, intending to concentrate on theatre, he landed two plum jobs in television, quickly followed by two films – Gorillas in the Mist and Paris by Night. It was the kind of kick start every drama school graduate dreams of but his early success never quite satisfied Glen’s appetite for live performance.

“I have never let go of that desire to keep a foot in both camps, stage and screen. Both excite me equally and they can feed each other. Film requires a truth, spontaneity and relaxation, while theatre needs more expression, greater use of language, a physical command and of course you try and bring all that back to your film work in various degrees. When you spread yourself thin, as I have, the possibilities for diversifying tend to come along more often.

Other actors must envy Glen’s ability to land consistently challenging and high profile work, while retaining his sense of mystery and anonymity. “You’re never really in control of your career,î he confides. “All the jobs I did last year came out of the blue. And I don’t mind playing second fiddle if something is well written.

“We have a fantastic theatre tradition in this country, we can produce high quality television and radio drama and the film industry produces good stuff intermittently. There is an opportunity to work all these outlets. British actors are very fucking lucky.

He switches back to film after the three month run of The Crucible, with a leading role in something he describes rather coyly as, “not a million miles from Tomb Raider. But at the time of our conversation, it is a low-budget independent film, Small Engine Repair, made last year, that he is most excited about. It was filmed in rural Ireland by first-time director Niall Heery and Glen is cast as a wannabe country singer who finds the courage to fulfil his dreams.

“I’ve always sung but mainly just to family, so it was a real bonus to sing and play the guitar as part of a role. The guy I play is a complex man with many different sides to him but basically a good soul who doesn’t always know what’s best for himself. It was a gift of a role.

The producers are looking for a screening at this year’s Sundance Film Festival, the springboard for so many cult successes. Watch this space.