You are here: Home / Theatre / Accidental Death of An Anarchist 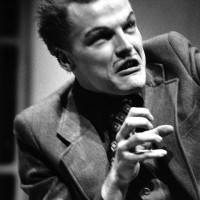 Accidental Death of An Anarchist

The Rep’s Young Company could be the best thing that has happened to theatre in Birmingham for many years. If it continues to deliver work like this stunning production of Dario Fo’s classic political farce, the city will be in danger of becoming renowned for its theatre. Fo’s play was first produced in 1970 but this English version is the one with which Belt and Braces scored a West End hit in 1979. It has been further tinkered with, with assistance from Birmingham playwright David Edgar, to introduce references as topical as this week’s Queen’s speech. The play turns a tragic true incident – the mysterious death of an anarchist railway worker while in police custody – into a wild farce. A certified maniac insinuates himself into a police station and persuades the officers concerned that he is the magistrate assigned to investigate the incident. In the enormously talented and enthusiastic hands of the Young Company, the result is sheer delirium. Within the deceptively realistic confines of Ian MacNeil’s set, director Derek Nicholls has coached marvelous ensemble playing with a high degree of stylization. Paul Kiernan and Iain Glen, as the two detectives on the spot, are probably the funniest double act you will see on a Birmingham stage this year. Timothy Watson, Crispin Redman and Marie Francis have smaller parts but they are all good, too. In short, this is a marvelous show that deserves to pack the main house.

I hope Birmingham Rep’s Young Company are well padded for their performances of Dario Fo’s “Accidental Death of an Anarchistî. The way the members of this energetic and enthusiastic young troupe hurl themselves around brings tears to the eyes. Fo’s plays often depend on improvisation and extensive revision and the cast seize the opportunity to make a number of political comments in line with Fo’s thinking, and not least among the targets of their vitriol are Margaret Thatcher, the Tory Government and the police. This is a cracking night out. Iain Glen and Paul Kiernan excel in their hilarious double act as the two officers under investigation, while Timothy Watson, Crispin Redman and Marie French turn in polished performances.

The Rep’s Young Company could be the best thing that has happened to theatre in Birmingham for many years.