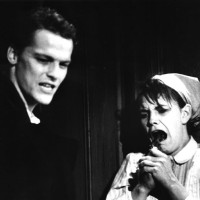 Prince Michael Bakunin and Sergei Nechaev were revolutionaries the Soviet text books don’t mention. Mike Stott’s thoroughly absorbing and entertaining play homing in on them in Swiss exile in 1871, suggests this is because Bakunin preached a love-oriented anarchism that found no place in the Bolshevik inheritance, while Nechaev articulated the philosophy of terror that did. What makes them compelling tragic-comic heroes is that both were also right after their fashion: revolution without humanity is as hopeless as trying to influence a terrorist state by peaceful argument. Ivor Benjamin’s production is splendidly zestful, funny and resonant. Witty and ominous signals of the coming horrors are to be seen and heard in text and staging. We get energy and risk-taking and from Iain Glen’s Nechaev we get the promise of great acting – a tortured evangelist of terror, on the run from the ugliness in himself.

Credit for the production’s excellence must go largely to award winning RADA graduate Iain Glen as Nechaev. His twitching hands, awkward yet strong body movements and pale, mobile face gave the character an almost terrible fascination. Without doubt the company has unearthed at least one major new talent.

It’s sheer brilliance. That’s the only word to describe The Young Company’s production of Dead Men, at Birmingham Repertory Theatre’s Studio. The show’s success is largely thanks to the excellent performances by all the cast, and in particular from Crispin Redman and Iain Glen.

…from Iain Glen’s Nechaev we get the promise of great acting – a tortured evangelist of terror, on the run from the ugliness in himself.