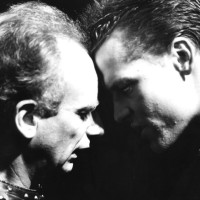 Visually; sensually, Nicholas Hytner’s production of Edward II is one of the most exciting, and exhilarating I’ve seen on the arena stage of the Royal Exchange Theatre in Manchester. Tom Cairn’s design draws on the three-dimensional, gladiatorial nature of theatre in-the-round. Filling the floor with a deep litter of dark compost surrounded by a raised walkway, it suggests both a circus and a bearpit as images of the medieval court. The glowering blue ball of the sky showers rain that churns the soft earth into sticky, degrading mud. All this theatrical wizardry, the glint and chink of golden armour, could be dangerously distracting. But the power and range of Ian McDiarmid’s performance as Edward keeps thrusting the text on your attention.

Nicolas Hytner’s revival of Marlow’s Edward II at the Royal Exchange in Manchester is one of the year’s outstanding theatrical events: a superb staging of the first English chronicle play that is as modern and outrageous as anything you might devise by mixing early Shakespeare with Joe Orton.

Michael Grandage provides a credible unvoluptuous Gaveston, full of Gallic vitality in a somber Northern court and Iain Glen’s young flattering Spencer captures the banal pedantry and monomania of those who, when the country is riven, strive to climb on the treacherous wheel.

Edward II at the Royal Exchange in Manchester is one of the year’s outstanding theatrical events.