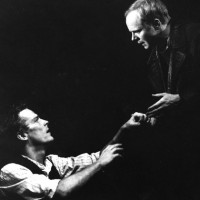 Max Stafford-Clark, recently remarked that he would have asked Shakespeare for a few rewrites if the Bard were around today. Such breathtaking arrogance conjured up a vision of director’s theatre at its most presumptuous, and I feared the mauling of a masterpiece. In fact the evening turns out to be a real success, occasionally provocative, to be sure, but blessed with a clarity and emotional intensity that reach to the heat of Shakespeare’s greatest play: Tom Wilkinson’s superb performance in the title role digs deep into the dark core of the drama. He’s a great bear of a man, and his awesome rages are both terrifying and strangely moving, the sheer pressure of emotion occasionally reducing him to baffled silence. His fear of madness is presented with heartbreaking simplicity: But there are a host of other striking performances. The Fool startlingly but effectively played by Andy Serkis as camp cockney drag artist, Lia Williams plays Goneril as an ice-cold beauty, proudly stalking the stage with regal hauteur. Her scene with Edmund (excellent work from Adrian Dunbar), achieves a thrilling erotic charge, while Saskia Reeves’s Regan has a neurotic nastiness that seems to verge on mental illness: her vivaciousness chills the heart.

But if Lear shows mankind at its worst (the blinding scene is especially ghastly here), it also shows it at its best. Iain Gen is a splendidly sympathetic Edgar, barely able to maintain his disguise as Poor Tom in the face of so much suffering. There is equally fine work form Philip Jackson as the doggedly loyal Kent and Hugh Ross as a Gloucester who gains real vision in blindness.

Wilkinson takes the verse in his stride; he does not pander to it, but never squanders it. There are some wonderful moments. The scene where Edgar leads his father to the brink of suicide over the cliffs of Dover can scarcely have been better done. The tension in what by now has become a thriller is breath-taking. Iain Glen, playing Edgar, has a claim to being the most outstanding actor in the production after Wilkinson’s Lear…this is probably the most exciting production of Lear you will ever see.

This is probably the most exciting production of Lear you will ever see.