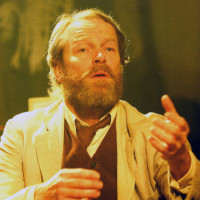 A witty translation, an evocative, claustrophobic setting, performances that hum with trapped energy – this is great Chekhov. Precious little happens. The men grumble and rage, the women yearn and suffer, and nearly everyone feels sorry for themselves. Yet even as they are comic, ridiculous, pathetic, these characters are also touching, believable and all-too recognisable. Catch yourself griping on the way home and you’ll know how honest Chekhov was. This sympathetic exasperation with his characters comes across brilliantly in Poulton’s salty, witty translation. It also characterises Lucy Bailey’s moving, physically vivid production, which deftly deepens with the play into a painful examination of frustrated hopes.
Bailey makes the most of the intimacy of her venue: here we are in the same world as the characters. William Dudley’s simple set is evocative but not too pretty. This is a working country estate. And Bailey seats the audience on four sides, so that we are closeted with the characters and feel their frustration and claustrophobia. When they soliloquise, we seem to be listening in on their thoughts, and when Vanya and Astrov burst into wild, drunken dancing they nearly land on top of the people in the front row.
In these close quarters, the actors make you feel the agony and absurdity of their characters physically. The show hums with trapped energy. Iain Glen’s volatile Vanya prowls the set like a caged tiger. You can see the traces of the young man who devoted himself to running his brother-in-law’s estate, in the belief that that brother-in-law was a great professor. But you also see how, realising that he has wasted 25 years, Vanya seethes with corroded energy and bitter disappointment. He is matched by William Houston’s vigorous Astrov, a great bear of a country doctor who spends his life mired in poverty and disease yet clings to a rusting belief in the potential of human beings. The arrival of the professor and his unhappy young wife, Yelena, drives both men into a frenzy of desire, resentment and despair.
There is a lovely performance from Charlotte Emmerson as Sonya, Vanya’s hard-working niece, while David Shaw-Parker is very funny as the bumbling Telegin and David Yelland is a splendid pompous windbag as the professor. It’s vigorous, raw and humane: great Chekhov.

For his role as Vanya, Glen’s jutting jaw has been fitted with a great hedge of beard, which he strokes pensively. He is on fine form: a dormant volcano who finally erupts at plane to sell the estate into which he has poured his life. Vanya’s explosion threatens to pitch him into madness, ad you can see him desperately trying to steady himself at the brink, like a drunk clutching a lamp-post. Iain Glen gives a Chekhov masterclass.

Lucy Bailey’s production of Uncle Vanya is the funniest and most vehemently volatile in mood of any account I have seen of this great play. The desperate desire to live that rages inside Chekhov’s frustrated failures erupts here with a rich sense of the ridiculous. But in a way that complicates rather than coarsens our sense of the marooned melancholy lot. Bill Dudley’s lovely, spare design opens up The Print Room to it’s fullest extent and positions the audience, involvingly around the four walls (into which framed photographs have been stenciled) of the play’s interiors. Iain Glen is on brilliant form as a crumpled scrubbely bearded Vanya who negotiates his mid-life crisis like some frantic, antic comedian offering a running commentary that is full of mocking mimicry and gesture. And yet you never loose sight of the generous soul that has been thwarted by circumstance.

When Iain Glen’s compelling Vanya spins into rage and starts firing off his gun, the impact is far more alarming and more personal than usual. In this latest outbreak of audience-threatening explosions in small spaces – a tremendous water spout in The Kitchen Sink recently came near to drenching those closest to the stage – he looks easily capable of taking out the front row.

My abiding memory, though, will be of two great, growling performances from Glen and Houston, a couple of top notch, hairy actors who don’t mess around and who play Chekhov vigorously and superbly, without kid gloves. The evening’s a tear-stained delight.

Iain Glen is on brilliant form as a crumpled scrubbely bearded Vanya who negotiates his mid-life crisis like some frantic, antic comedian…