You are here: Home / Press / University of Aberdeen Magazine (Kidnapped) 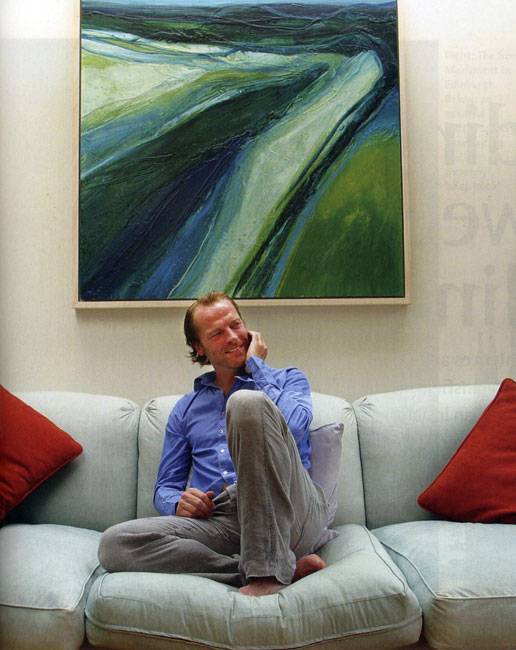 IAIN GLEN IS PART OF A GOLDEN GENERATION OF SCOTTISH ACTORS

Alan Taylor talks to him about his Aberdeen days, and why he will never turn his back on the theatre.

Resting, in acting parlance, is a euphemism for unemployment. At one time or another, all actors, unless they’re one of the long-term residents of Coronation Street or Albert Square, have periods when they’re doing nothing, when they’re between jobs.

But Iain Glen has rarely been without work for long. Usually, he is simply biding his time, counting down the days until filming starts or waiting for rehearsals to begin.

Meanwhile, he reads scripts, practices on the piano and the guitar, hangs out with his family, bashes tennis balls or does what ever he has to do to prepare himself for a forthcoming role. Just recently, Glen says, he’s been attending a dialect coach in order to perfect an 18th century Highland accent.

It is early on a summer’s afternoon in Dulwich, the drowsy, south London suburb he calls home. He is dressed casually in loose-fitting shirt and trousers and sandals, a cigarette never far from his lips. Soon, he explains, he will be flying to New Zealand where he will be making a new version of Kidnapped for a three-part BBC series. He, of course, will be playing Alan Breck, Robert Louis Stevenson’s enigmatic Jacobite who has “a grand memory for forgetting.î

“It’s a shame in a way that we’re traveling to the other side of the world to film such a quintessentially Scottish novel,î he says. “Financially, apparently, it makes sense. You can buy twice or three times as much and it’s cheaper to fly the principals out.î

But in terms of the landscape, he says, that can be easily reproduced in New Zealand and, given the amount of time he is likely to spend in water, the balmy South Seas are more appealing than the temperature of the North Sea.

He relished re-reading the Robert Louis Stevenson novel, which he had not picked up for years. He couldn’t put the script down, he says, and was fascinated by the character of Breck, who is “Larger than life: and “a wonderful extrovertî. What particularly appealed to Glen about him, however, was the aura of enigma which engulfs him.

“You don’t really know where he’s coming from. He seems to be pursuing something that entails sacrificing his freedom. That passion. That belief. And yet he seems to be doing it in a slightly vainglorious way.î As Glen says: “It is a fantastic adventure story.î

He could just as well be describing his own career. Throw him a challenge and he’ll turn into a performing seal to catch it. Nor is he ever reluctant to move on from one project to another. On the contrary, he says, it is a part of the business he finds easy to accept.

“I suppose deep somewhere in the actor’s psyche you celebrate the fractured nature of the lifestyle. I love getting very, very absorbed in whatever it is I’m doing. But a moment comes when it’s time to let it go and I can do that disgracefully easily.

“I don’t have an aftermath when I’m trying to recover and hopefully there’s something round the corner that’s going to fully engage me. Different things require a different kind of involvement. Some things you don’t want to think about at all and some things you want to prepare for way, way up front.î

He first got into acting at the University of Aberdeen, when he enlisted to study English. It was, Glen recalls, towards the end of his second year, that he was truly bitten by the bug. There was no stage tradition in his family. His mother was an occupational therapist who painted as a hobby. His father, a keen country dancer, worked for the Scottish Investment Trust. He and his brother, Hamish, who is a theatre director, often wonder how they came to go into the same profession. Neither apparently, has found a satisfactory answer.

“I had no notion of acting whatsoever,î says Glen. “I don’t really have any vivid memories of watching a great deal of television or films. I don’t know what I thought. I certainly didn’t think there were actors and that was a profession you could pursue.î

During Freshers’ Week, fate, in the form of a couple of friends, steered him towards the drama society. It was, he now appreciates, “the death knell of his academic aspirations. In his first year, he played in Friedrich DÙrrenmatt’s The Physicist and in a comedy review written by Nicky Campbell, the DJ and TV presenter.

A year later, he made his debut at the Edinburgh Festival Fringe in Martin Sherman’s Bent, about the persecution of homosexuals under the Nazis. Did the reviewers recognise a star in the making? “I got enough to keep me going,î he concedes modestly.

It was time to decide whether to commit himself fully to acting or academe, but it was never really in doubt which path would choose. He left Aberdeen at the end of his second year and got an agent, his essential Equity card and was accepted by the Royal Academy of Dramatic Art (RADA). Glen had fond his m³tier. “I’d got my act together.î

With the benefit of hindsight, he says, he was always performing in one way or another. As teenagers, he and his mates would call a Radio Forth phone-in “week in, week outî pretending to be whoever took their fancy. One day he’d be an investor who’d discovered a glue that children could sniff without any harmful side effects, the next he’d be a self-confessed vandal who wept over the worthlessness of his lot.

It must all have stood in good stead because he emerged from RADA in 1986 with the Bancroft Gold Medal and a couple of parts.

Throughout his career he has shuttled between the movies and theatre, playing Charlotte Rampling’s lover in Paris By Night then Stanley Kowalski in A Streetcar Named Desire. “I was always available for theatre,î he says. “I always wanted to do that. Hopefully you duck and dive to avoid being typecast.î

There was a point, he reckons, when he could have made a greater commitment to the movies and perhaps become a more bankable name, but he was never inclined to turn his back on classical theatre.

“I don’t crave Hollywood,î he once said. “It’s a different beast altogether.î Rumours that he is about to replace Pierce Brosnan as James Bond are no more than that. He is flattered to be mentioned in dispatches, but isn’t waiting by the phone for whoever is the new Cubby Broccoli to call.

He seems to take parts as they come, judging them initially on the good quality of the script. “If the script is really good,î he says, “that’ll say something about the director. Directors want good scripts as much as actors. Of course, there’s a grey area where a script is good, but could be very good and you think you can play a part in influencing that.î

As an actor, Glen says, there is always the worry that you will be found out. But he is also sufficiently confident in his own ability to realise there comes a point in every production when he has mastered his role and feels he won’t be find out and is really going to enjoy it.

In essence he says, acting is about inhabiting the lives of different people, changing skins like a chameleon, whether you’re the King or the Fool. At university, he says, he rather admired student politicians whose passion was to change the world. His passion, belatedly discovered, was for acting, what Sir Ralph Richardson described as “the art of keeping a large group of people from coughing.î

At 43 Glen is in his prime, part of a golden generation of Scottish actors which includes Ewan McGregor, Robert Carlyle, Alan Cumming and Dougray Scott. And he has followed from afar the campaign for a Scottish National Theatre, in which his brother Hamish, was one of the key champions. When we met, it had already been given the go-ahead and its first director, Vicky Featherstone, was appointed subsequently. When asked if he would be keen to be involved in it, he says: “I definitely would. Of course.î Which, one trusts without being too presumptuous, must be music to Ms Featherstone’s ears.