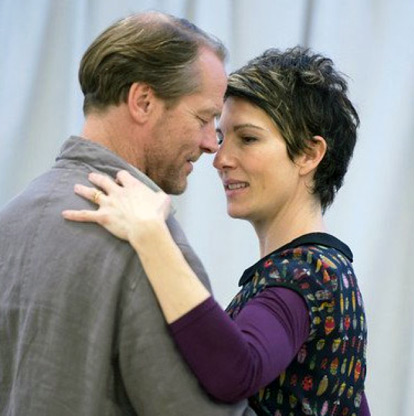 Busiest actor in showbiz talks to Bridget Galton about his Hampstead role in debut play reworked from Checkhov short stories.

There’s a tangible buzz of excitement around Hampstead Theatre these days. When I arrive to interview the venue’s latest big name actor, the “House Full” sign is pride of place on Eton Avenue and the foyer is thronged with matinée-goers who’ve secured the last tickets for outgoing play Di and Viv and Rose. The last time I visited, they were patiently queuing for returns to see Rupert Everett as Oscar Wilde in The Judas Kiss – a show now running in the West End.

It’s all so different from the pre-Edward Hall wilderness years when play after play received a critical drubbing and even loyal audiences lost faith.

It looks as though that sign will become rather weather-beaten in the coming weeks since the next play, starring Iain Glen, Tamsin Greig and John Sessions, is close to selling out before opening night. Longing is the debut play of novelist William Boyd, of Reckless and Any Human Heart fame, who has turned the characters and settings of two Chekhov short stories into a full-length drama that ploughs the familiar furrow of painfully humorous unfulfilled hope in provincial 19th century Russia.

Glen, possibly the busiest actor in showbiz at the moment, insists: “We are not doing a Chekhov play, we are doing a play in the world of Chekhov.

“It’s inspired by those two stories but he has reworked them so they are unrecognisable.” The actor has recently finished playing Uncle Vanya, but adds: “Chekhov is the master and you can’t get too much of it really. It’s very exciting to do a new play. That was the big draw, as well as William, who is a brilliant novelist. I read the script and thought it was marvellous. It’s a big shift from a novel to writing a play, which has to unfold through dialogue but this is very, very good.”

The 51-year-old, who turns out to be a courteous and relaxed interviewee, plays a successful Moscow lawyer who returns to the country estate where he spent his salad days as a tutor. He once again excites the affections of Greig’s character, one of the daughters of the family, who are seeking his help with their financial woes.

“He’s coming back after a long period to the people he spent this idyllic period with, but there are ulterior motives, and the estate is in jeopardy. He’s a solitary man, although loved by women he’s never been able to commit to a loving long-term relationship. He’s a commitment-phobe.”

The play is billed as humorous, though when I put to Glen that Chekhov too often barely raises a smile, he agrees. “Chekhov can be treated too seriously and forbiddingly and be seen as full of melancholic people and it’s a mystery how he could be misinterpreted that way because he made it clear in his lifetime that he felt the first productions of his great plays were being misplayed and took to writing “comedy” in brackets after the title.

The truth is, like many great plays, they are a mixture of both sadness and humour and should make you laugh and cry. He portrays human nature as messy, unfocused and full of misplaced longing.One of the reasons his plays are universal is those qualities about human nature remain the same.”

Glen’s enviably diverse and consistently busy career has taken in classic stage roles from Shakespeare, to Ibsen, Chekhov to Tennessee Williams. When we meet, he’s enjoying the “different frisson” of rehearsing an untested script.

“Rehearsal for me is my happiest time, a time of risk and play,” he says. “Representing a piece of writing in theatre, without the pressure of an audience is the most exciting time. I love playing with the actors and director about how something can become manifest, that’s the reason I went into this job, not for fortune or walking down a red carpet – to play with lines and make them feel they belong to me.”
As opening night approaches, he admits to a certain anxiety, but never fright.

“The closer you get to having to put it in front of people the more there is a nervousness that focuses you. But fear isn’t very useful, I try not to be fearful it stops you being playful, and the longer you have been in the business you realise you can’t always please all the people all the time. Things go wrong. Life goes on.”

Not only does he move easily between theatre, radio, film and TV, but Glen is unusual in being freely cast across all classes and types, and his supremely unprecious view of the profession even extends to the unactorly comment that: “I don’t mean to negate what we do but there are some programmes which could be recast and be just as successful.”

“Class is an obsession for some, and for me not to be typecast classwise was terribly important. It was perhaps helpful that my Scottish accent wasn’t too strong and was hard to pin down. I feel very grateful that I can chop and change, I would feel very bereft if film or theatre was taken away, I relish the change and differences each brings, and I think I would have had more fallow periods if I hadn’t been available wanting to work in all mediums or had insisted on only doing movies.”

But while he enjoys adopting dialogues and is “a bit dog like” with a new part, he’s not the type to become haunted by discarded characters.

“As an actor you come in at the eleventh hour and do the visible thing that gets noticed, on any given night you have to be very, very present but once it’s finished you can bugger off and forget about it rather quickly. That suits my superficial nature. When I exit a film set on wrap, I’m out of there like a rocket. I change myself out of costume and make-up and am off back to family and home.”
That home is in Dulwich with actress Charlotte Emerson and their daughter.

And while there are enthusiastic fans (Game of Thrones, Downton Abbey), it’s nothing like the frenzy surrounding his appearance at the Donmar Warehouse in 1998, opposite Nicole Kidman in sexual-merry-go-round drama The Blue Room.

It brought unwanted paparazzi attention to both his own first marriage and Kidman’s marriage when she split from Tom Cruise a few years later.

“I would be lying if I said I wouldn’t like to play a role in a hugely successful film that gave me world wide recognition, but how I would be with the degree of scrutiny of a Tom Cruise, I don’t know. I’ve had times when I became recognisable and got a taste of it. I am not unhappy with how things have panned out.”