You are here: Home / Press / Vogue (The Blue Room) 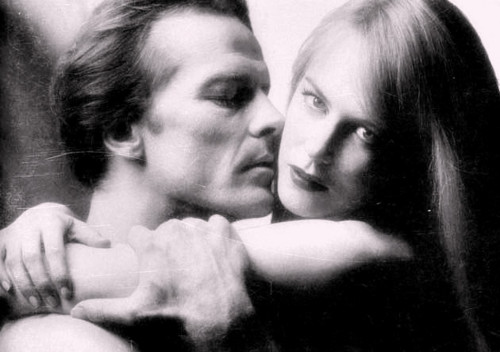 So what kind of a way to spell your name is Iain? Mr. Glen grins. “The right way! Not the way it was bastardized by the English!” The broad smile defines even more sharply the bones and sinew of the slender Scottish actor. Glen, 37, was becoming increasingly well known as a Shakespearean and film actor in Britain when, in September, he took on a role that put his entire musculature and external organs under critical scrutiny. The London press went berserk over David Hare’s The Blue Room (based on Arthur Schnitzler’s La Ronde), in which Glen and his costar are briefly nude in one scene. “Pure theatrical Viagra, said one unreflective critic; “I honestly thought I had gone to paradise for a couple of hours, said another.

After more than 30 years of theatrical nudity, such hysteria seems a bit adolescent, even if his costar is Nicole Kidman. As a result, the actors in this two-hander (each plays five characters) now on Broadway have been subjected not only to voyeurism (particularly creepy on a thrust stage, with some members of the audience less than ten feet away) but to rapacity: Although the staff of the London theatre searched patrons’ bags and confiscated cameras, a few slipped through trying to snap the moment in which Glen, on his knees, helps a standing Kidman on with her underpants.

Understandably with The Blue Room‘s having moved to Broadway, Glen finds this reaction “disturbing and says that, like Kidman, he feels “vulnerable, especially on a stage furnished at different times with only a bed, a chair, or a kitchen sink. In addition, they are both keyed up anyway by playing characters whom we see just before or after coitus. “There is a kind of concertina of time that happens, I think, when the pulse starts to tighten around the sexual act. At the end of each scene, Nicole and I have to remind ourselves that each new character is going to be in that heightened territory where the sexual antennae are incredibly alert, where the possibility of sex is very near all the time. But we’re not really aware of the audience. We’re feeling what it’s like to be naked in front of this person within the play.

Ironically, Glen’s acting urges began with his “wanting to be noticed. I was battling for airspace with two older brothers. It was a cause that engaged him more than school: “I think it’s safe to say I was a bit wayward. “He, Graeme, and Hamish grew up in Edinburgh, the sons of “very loving parents,î an investment manager and an occupational therapist. At the University of Aberdeen, Glen played guitar for a band, the Occasional Tables, but an involvement with the drama society took a firmer hold on him. He left university for the Royal Academy of Dramatic Art in London, where he and classmate Ralph Fiennes would “battle for hours with swords.

As well as for his many TV and film roles (Mountains of the Moon, Gorillas in the Mist), Glen has won praise for his Macbeth and Hamlet and also for his Henry V with the Royal Shakespeare Company, typically playing the troubled boy behind the dashing prince. Though he had never appeared in a musical before, he won the lead in the London run of Martin Guerre: “The producers willed me to be able to sing.

Though Glen loves the stage, he finds that “ideas nowadays have become very small and language has diminished. We’ve lost the moral, spiritual, and intellectual landscape of the classical theatre. On film, words are more minimal and more bitty, but what people don’t say is as important as what they do say, so I think that film experience is a very good thing for a stage actor. It helps bring the subtext out into the open.

This skill is particularly important in Hare’s sour-sweet drama, in which the character who appears naked is, in fact, the most defensive and disguised of the five. “He wants to appear physically careless, but, though he protests otherwise, he’s very neurotic and closed. The contrast between the skin and what’s inside it is too deft a bit of acting to be reduced to a pinup, so, if you visit The Blue Room, don’t get caught looking when you should be listening.