Time Out (The Fear) 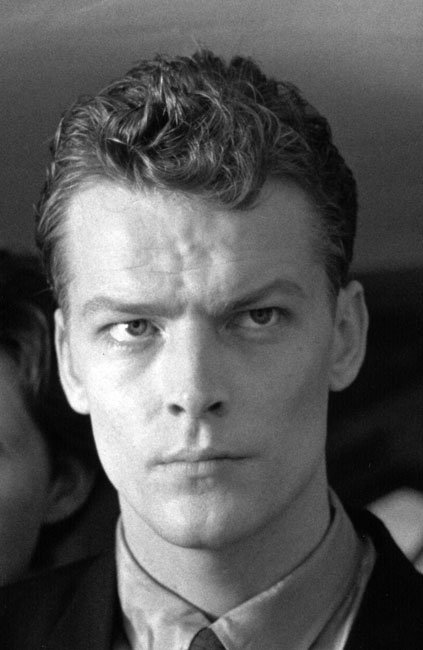 Half devil, half angel, Iain Glen is the ace face of the moment as The Fear‘s brutal villain. And with several movies in the can and Tom Stoppard’s latest play to come, it looks as though crime does pay.

For the last few weeks, television has been dominated on Wednesday nights by a phenomenon called ‘The Fear’. It depicts a group of young, immaculately dressed North London villains perpetrating unspeakable vile acts in the name of power. They are led by the quietly awe-inspiring and irresistible Carl Galton, a brutal social-climber driven by profound and insatiable self-interest. He represents a whole new brand of TV villain, and people everywhere are talking about him.

Iain Glen is the face of ‘The Fear’, lending Carl Galton the exquisitely evil features of the devil himself. Short blond curls, the hollow, angular cheeks of an anorexic angel and laser beam eyes of permafrost intensity. At least that’s how he appears on screen. In the flesh, Glen’s features soften and his demeanour is more delicate than demonic. There’s even a bottle of orange multi-vitamin tablets on his dressing table. And Glen’s not even a Londoner: he speaks with the gentle accent of a lad who left his Edinburgh home five years ago.

‘I got a lot of help with the accent,’ he says, ‘especially from Ian Dury, who I was working with in the Royal Court production of “Road” at the time “The Fear” offer came along. More than anything, he taught me the rhythm of the accent, which was really difficult. The further south we Scots go, the harder the accent gets.’

Quietly assertive, Glen is anxious to give credit where credit is due. He is also concerned about some of the accusations leveled at the show; that it portrays a world which doesn’t exist, that it trivialises the criminal world, that it glamourises violence.

‘Of Course, Carl is horrific. What he feels and represents is awful. He’s incredibly egotistical and selfish and possesses an achiever drive that shits on everyone. I don’t think you have to like anything about him, but we should try to understand why he is the way he is, and I think we establish enough in the show to see how it’s possible now for someone to turn out like that.

‘I’m probably the worst person in the world to defend Carl; for what he does, what he says, what he is. I’m far too close to him. You can, I suppose treat the show as designer violence, a meaningless kind of thing; or you can see it as a study of a new breed of young guy coming up in the ’80s, who has a selfishness that’s encouraged to grow.’

Glen’s right, of course. There’s no question that there’s a new breed of materialistic, working-class young Londoner whose aim in life is to drive an expensive car and spend a fortune on clothes. All you have to do is look at the shops down the Old Kent Road to see the evidence. And the money to pay for all that has to come from somewhere. You don’t earn it as a labourer, that’s for sure.

‘They were a generation who were promised an enormous amount and didn’t get it,’ says Glen. ‘They thought, “I’m going out and I’m going to take it.” They have a predatory outlook that could have got them jobs in the City, but instead they’re working underground.’

At 26, Glen has already accrued extensive work experience. In fact, he hasn’t stopped working since he left RADA just over two years ago; a factor which has contributed no end to his development as an actor and allowed him to exceed his most grandiose expectations.

Until he was 19, Glen didn’t even expect to become an actor. It was all a bit of an accident. After re-sitting his exams to improve his grades and gain entry to Aberdeen University in order to read English, Glen met up with two schoolfriends who had gone up to Aberdeen the previous year and become active in the campus drama society. Glen was asked to come along, and the bug bit instantly. ‘Before that I had been quite distracted, to put it mildly. Here was something I felt I could put positive energy into; actually do something productive for a change.’

After two years at Aberdeen Glen knew what he wanted, and he applied for RADA. ‘I took it all desperately seriously. Admittedly I was surprised when I got in but, God, I really wanted it. At my audition I practically got on my knees and begged the principal to give me a place.’ Sure enough, the letter of acceptance came. That arrival reminded Glen of an unfortunate incident: ‘It’s an awful story of a mate, Jason Watkins, who was at drama school. When he opened the letter (of acceptance to RADA), he was so overjoyed that he jumped up in the air, but he landed on his cat and killed it stone dead. Can you imagine the range of emotions he went through?’

Prior to ‘The Fear’, Glen’s most notable performance in his cast portfolio was in ‘Will You Love Me Tomorrow’, part of BBC2’s ‘Screen Two’ series, in which he starred with Joanne Whalley, Phil Daniels and Tilly Vosburgh. And after filming ‘The Fear’ last summer, he flew to Kenya to play opposite Sigourney Weaver in ‘Gorillas In The Mist’, then opposite Billie Whitelaw in ‘The Picnic’ (another for ‘Screen Two’), and then off to Paris for David Hare’s latest film, ‘Paris By Night’. Right now he’s appearing in Tom Stoppard’s new play, ‘Hapgood’, in which he is again working with some top names, including Nigel Hawthorne and Felicity Kendal. ‘I’ve been working in such good company’, he says, ‘and everyone’s really sorted me out and got much better work out of me than I could have given then without their efforts. And that’s all you could ask for really. It’s been wonderful.’

Glen’s career has now reached the point where he could either pull off a couple more striking roles and graduate to superstar status or lose his head and collapse under the pressure. Certainly things have become a little uncomfortable since people have started to recognize him in the street. ‘I’m a bit of a wanker over things like that, I really mess myself up. It should be easy to handle, and there’s a side of me that says “well, this is what I was after” and the other that says “no it isn’t” and then there’s a voice which says “shut up Iain, they’re not really looking at you, you’re just imagining it.” Pretty stupid really. But I try to keep ahead of it, I try to keep a third eye looking hard at me to make sure that I don’t lose sight of myself.’

I had Glen down as a terribly serious young man, earnest and dedicated to mastering his craft and ready to suffer for his art. Not quite. ‘You know, Don,’ he says as if in a sudden moment of revelation, ‘I treat this all as one big adventure. But then again, I often feel I could just chuck it all in and go skiing.’