The Times (The Rig) 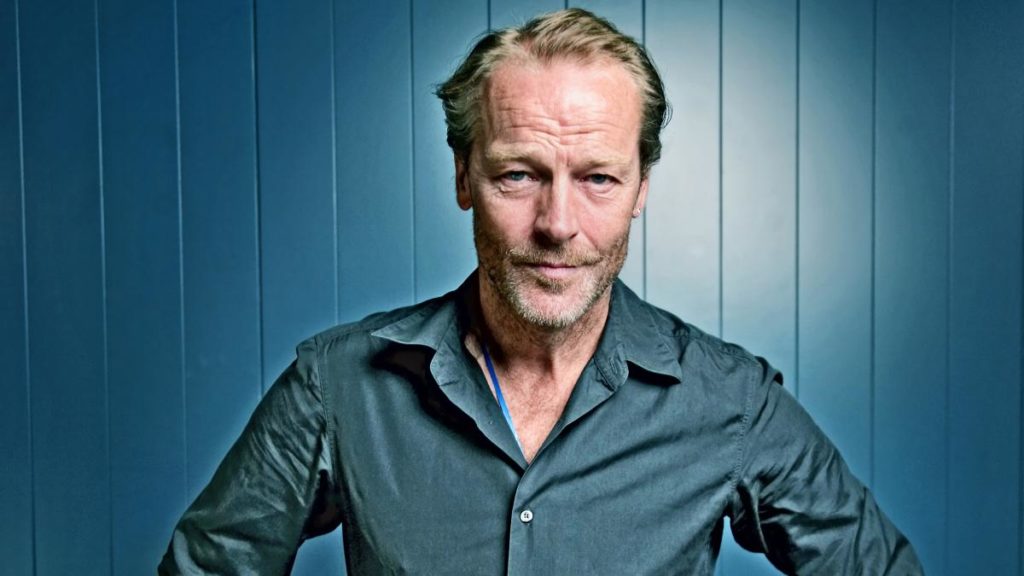 The actor tells Julia Llewellyn Smith about The Rig, fatherhood, and being a sex symbol in his sixties.

The actor Iain Glen is known for many things, including playing Sir Richard Carlisle in Downton Abbey, Bruce Wayne in Titans and Ser Jorah Mormont in all eight seasons of Game of Thrones. But he first really hit the headlines in 1998 when he cartwheeled naked across the West End stage in The Blue Room, the play in which his co-star Nicole Kidman also disrobed, somewhat less flamboyantly — an event immortalised as “theatrical Viagra”.

“That’s the last time I took my clothes off on stage,” the 61-year-old Scot says. “It didn’t really bother me. I’ve definitely got an extrovert streak.” At the time he joked that despite his antics all the attention went to Kidman. “Yeah, exactly!” he says, laughing. “Not much attention is paid to male genitalia. Nicole was naked much less than I was, but we both had to commit to it. I’d [act nude] again if the context was right, if it wasn’t gratuitous.”

Hopeful news for the many Glen groupies out there. Other interviewers have sighed about his “piercing, soulful eyes, impeccable manners and an air of inner strength [making him] born to play romantic leads”, of how he’s “blessed with the kind of bone structure that would have made Michelangelo weep”, and declared him “hot, hot, hotter: than ever”. Does he look in the mirror and think: “Ooh, sex symbol?” Glen’s pale Scottish skin flushes in endearing embarrassment.

“I don’t know,” he says, squirming, squeezing his hands between his knees. “I just think I’ve been really lucky. My twenties, thirties, forties have all been different periods, and if people ask me what I want it’s more of just the same.” It’s a neat bit of question dodging, but fans can be reassured that Glen’s in good nick for a sexagenarian — his brow only a tad more creased and hairline slightly higher than in his striptease days. He’s a fitness nut who plays tennis regularly, walks the family labrador and cycles everywhere from his home in Dulwich, south London, but he attributes his wellbeing to his uxoriousness towards his second wife, the actress Charlotte Emmerson. “I’m very, very lucky to have met the love of my life,” he says.

He was relaxed about turning 60 last year. “In my head I’m probably still about 17,” he says in his genteel Edinburgh tones. “I’m deeply immature. But as an actor you have to retain that slightly childish curiosity about things.”

His youthful aura is boosted by hanging out with his and Emmerson’s daughters, who are 15 and 9. He has a 27-year-old son with his first wife, the actress Susannah Harker. “I feel like I’ve been bringing up children all my life,” Glen says, grinning. “Kids are very, very exhausting. But paradoxically, they keep you young because of their take on life. You’re reminded about the magic of seeing things for the first time.”

We’re sitting in a London hotel suite on a freezing day, yet Glen is in an open-neck shirt, jeans and — disconcertingly — flip flops. “I always wear flip flops. I’ve got these fat flippers for feet and I don’t get too cold. It must be the Scottish genes. I like a cold house. I’m slightly obsessed by airless, overheated rooms. Whatever public building you are in anywhere in the UK will be massively hot — I think: ‘There’s a freaking climate crisis.’ To me there’s no such thing as bad weather, it’s just bad clothes. What’s wrong with putting a jumper on? There’s always a bit of a battle with the family about it — my wife’s blood is more Mediterranean — and she, of course, will always end up getting her own way. And quite right.”

His beachy vibe is enhanced by the gold stud in his left ear. “I created that myself aged 12 or 13 with an ice cube and a pin. I had ten years of not wearing anything, but then one of my children forced [an earring] back through.” They didn’t die of embarrassment? “No, I’ve got sweet children.”

Glen goes on to tell me that he has recently returned from Sydney, where he played a “stoner surfer” in the Disney+ comedy Last Days of the Space Age. Sounds like perfect casting. He has been super-busy — there’s the forthcoming Apple TV adaptation of Hugh Howey’s dystopian novel Wool, and he’s about to film a second season of the grisly South African-set detective drama The Cane Field Killings for Channel 4. Then there’s the show we’re here to talk about, Amazon’s The Rig, a supernatural thriller set on an oil rig cut off by fog in the North Sea, where something very nasty lurks in the stormy waters.

In this claustrophobic setting, Glen plays the increasingly spooked crew’s leader. “Working on a rig is a fairly high-risk profession — I think that’s why people are drawn to the oil industry. There’s fast bucks to be earned, it’s high-intensity work and you’re in an isolated space in a very alien, dangerous environment. It doesn’t matter whether you’re outside on the platforms or inside the control — the stakes are incredibly high, and there’s a huge onus to maximise profits.”

It was a perfect fit for Glen, who, in what he admits laughingly is “a slightly crap parallel”, has always been an adrenaline junkie, diving off the highest board at the Commonwealth Pool in Edinburgh as a child, skydiving and doing the highest bungee jump in the world in South Africa. “I love doing those things — but always with a safety net. It actually feels a little bit like acting. You recreate these dangerous situations, but you know you’re fundamentally in a safe place.”

Most of The Rig’s shoot happened not, mercifully, out at sea but on a meticulously constructed set in the Edinburgh seaside suburb of Leith, not far from where Glen, whose father was an accountant, grew up. “I was a rebel in a slightly middle-class fashion,” he says. “I struggled at school, I was not academic.”

He went on to the University of Aberdeen, but having discovered acting there dropped out to go to Rada. Since then the work has not stopped. Game of Thrones, of course, is what he’s best known for, his character Ser Jorah Mormont, lovelorn counsellor to Daenerys Targaryen (Emilia Clarke), one of the very few to survive ten years without being violently killed off. When Glen signed up he had no idea of the juggernaut he was joining.

“The pilot was disastrous. I think there were something like 52 pages and we had to reshoot 48 of them. But season by season it became a global phenomenon.” Some actors resent being known for blockbusters, but Glen laughs as he says: “I don’t think: ‘Why don’t you know me for my Henry V at Stratford?’ Those were heady days — if you can’t enjoy that, then you’re not going to enjoy much.”

Like many cast members, Glen cried when the series wrapped a decade ago. “It had been a massive adventure ride.” But the jobs have kept coming, to his delight. “I have that sense, like a lot of actors, that if anything I’m the total opposite of ‘hot, hot, hot’ — it’s: ‘When am I going to be found out?’ I don’t want to sound disingenuous, but I can’t believe I keep getting away with this.”

Your phone screensaver?
My youngest girl with a quirky expression on her face

I couldn’t get through the weekend without . . .
A game of tennis

– Interview with Julia Llewellyn Smith. A version of this interview was originally published in The Times.