You are here: Home / Press / The Telegraph (The Cane Field Killings)

The Telegraph (The Cane Field Killings) 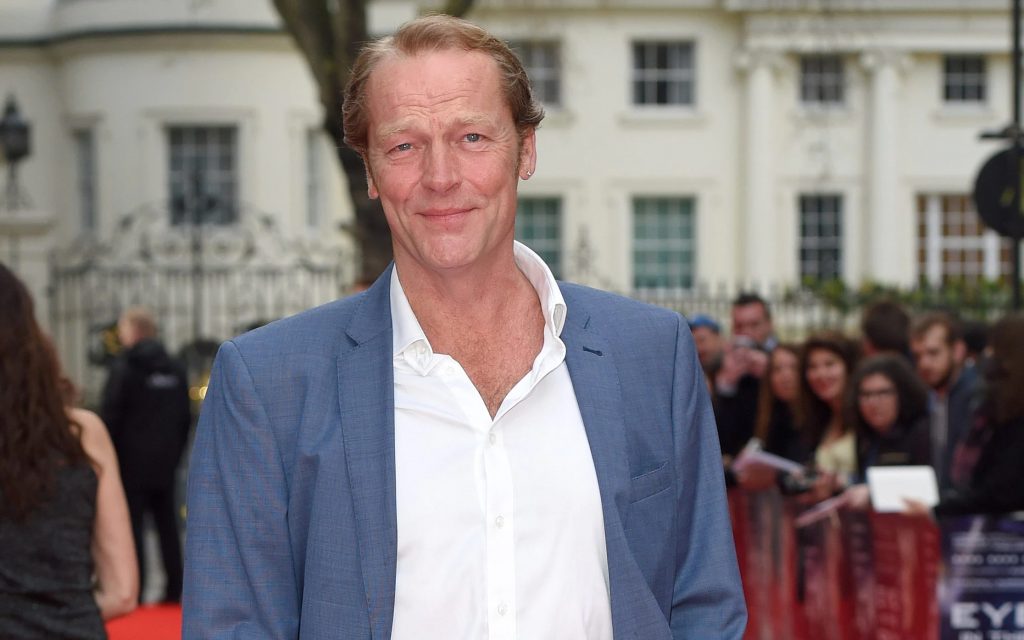 Iain Glen: ‘The worst thing about being an actor? Producers think that we’ll take drugs and get lost’

The Game of Thrones actor remembers meeting ‘childhood god’ David Bowie, witnessing the birth of his kids and his career highlight

Iain Glen, 60, is an award-winning Scottish actor familiar to millions from his roles as Ser Jorah in Game of Thrones, Bruce Wayne in Titans and Sir Richard Carlisle in Downton Abbey. In the new South African Channel 4 series The Cane Field Killings he plays a child abductor trying to secure his release from prison. Married for the second time, Glen lives in south London with his wife, Charlotte, and three children, Finlay, Mary and Juliet.

Best encounter with a celebrity?

I was doing this play at the Donmar Warehouse called Here, written by Michael Frayn, in 1993. It wasn’t quite functioning and we somehow managed to not fill this little space – which is actually quite difficult to do – but during this one matinée, there was this vocal laughter coming from the audience. You can creep into the little lighting booth and peek out, so I did and I was like, “F—— hell, that’s David Bowie!” My absolute childhood god: and there he was laughing at me on stage. Someone suggested we say hello afterwards, but I couldn’t do the “Hi, I’m a fan!” thing. So it wasn’t really an “encounter” as such, but still…

Best thing a fan has ever said to you?

You get used to keeping your eyes down, particularly when it’s busy. I mean, 99 per cent of the time it’s lovely – what’s not to like, when people say, “Oh, I loved you in this or that”? – but sometimes you’re busy and, on this occasion, I was at an airport when I sensed this woman’s physicality. I know that she recognised me, but I pushed on, intent upon getting a coffee. On the way back, the lady was waiting and asked: “Oh, excuse me, are you Ser Jorah?” I say: “Yes, I am.” She says: “Would you mind saying something to me? Can you just look me in the eye and say [the name of Game of Thrones character] ‘Khaleesi’?” There are mock-ups of things on YouTube of every single time I say “Khaleesi”, you know, making me look ridiculous – but she wanted me to say it to her, so I did. And she said: “Oh, thank you, thank you.” But the way she did it, she was so terribly earnest, and it felt like it meant a great deal to her.

Best moment of your career?

My dad’s a wonderful man. As a chartered accountant he operated in a completely different world and [before dementia] was very dry, very typically Scottish. So I remember when I did The Crucible with the RSC – I was playing John Proctor who goes through this extraordinary arc in the play, ending up with his life in ruins, having to deny his own existence in a way – and my dad came into dressing room afterwards. I said: “So, what do you think?” And he burst into tears. He didn’t say why he liked it, but that was a highlight seeing my dad’s reaction.

Best experience in your life?

The best thing that’s ever happened in my life is witnessing the birth of my children – and one in particular, Mary. I am fairly useless in these situations because it is unbelievable to see somebody you love go through that. My wife gave birth to this beautiful baby girl and I’m in tears. And the midwife said: “Do you want to tell the mother what the child is?” And I mistook the umbilical cord for a penis and said, crying: “It’s a boy, it’s a boy!” And the midwife said, “No, no it’s not, it’s the other.” The great thing about having children is that it does teach you the nature of altruistic love. Children demand that of you and it’s good for the soul.

I’ve got a Martin acoustic guitar, which I bought in New York when I was doing The Blue Room [on Broadway] with Nicole Kidman there. Martin guitars are much cheaper there. It’s probably worth about double what I paid for it now, and it’s the perfect guitar for singing without an amplifier. Actually, my office got broken into about a year ago, and they stole all my recording equipment, but for some reason they didn’t take the guitar and I was ever so grateful.

I’m always haunted by this memory. My uncle was a Church of Scotland minister on Iona. My family went to see him on holiday once and visited this crystal mine [the island’s green marble quarry], but while we were walking back over these undulating hills I must have been distracted by something, because when I looked up everyone had gone. I was petrified. I started to run and after 10 minutes panicking I found this house and started knocking on the door saying: “I’ve lost my family.” I heard, “Hello, can I help you?” and at that moment, my mother shouted from behind me: “Iain, there you are!” It’s one of those recurring things where you know where you are and you’re secure, then suddenly being alone, lost and confused. It’s always haunted me. It’s that sense of, “I know what I’m doing, I’m super confident” and then suddenly thinking, “I do not have a clue.” I can have that sensation at any time; I get that little tug in my solar plexus and remember emerging from that crystal mine.

Every time I leave to go and work, different animals appear in my house: it’s like they just wait for me to go. We’ve got lizards, a tortoise, two cats, hamsters, about 10 fish, and a labrador called Pippa – she’s an absolute delight. My worst pet moment does not really concern me but my friend [Bafta-winning actor] Jason Watkins. We were both accepted by the Royal Academy of Dramatic Art at the same time. When I got my acceptance letter I cheered and ran around the garden, jumping up and down. Jason opened his letter, jumped up in the air going, “Yay!” – and landed on his cat. They had to have the cat put down. Imagine the best moment of your life absolutely ruined a second later by the death of your favourite pet.

I love playing the guitar and my little office at the bottom of the garden is also a wee recording studio. I have this piece of software, Logic Pro, and I just about piece it together and put it on single tracks. It is extraordinary in terms of what it can do, and yet I use 0.00001 per cent of its capacity, as I just try and plug the mic into the right slot and hit the right buttons. It is agonising. At one point I got a Logic Pro person to help me, but within a week I’d forgotten everything.

Worst thing about being an actor?

On the whole, producers don’t trust actors at all. They think that we’ll take drugs and get lost somewhere overnight if we’re not picked up and taken from A to B – even going from trailer to set. It’s rather pathetic really. So over a lifetime of being an actor, I’ve no sense of direction at all. My wife is always taking the p— out of me because I’ve never had to bother with directions.

Worst moment of your career?

I was playing Henry V with the RSC at Stratford [in 1994] and there is quite a well-known scene at Southampton docks where Henry realises there are three traitors in his ranks – the Earl of Cambridge, Lord Scroop and Sir Thomas Grey, if memory serves. At one point I had to grab Cambridge and throw him on the ground, but my trajectory must have been off. Anyway, after I’d thrown him I saw this actor slide on his breastplate, half the length of the stage and fall off the front. He just disappeared. And then, like a cartoon, I saw one hand come back on stage, then the other, with an elderly member of the audience pushing him back up. And I was gone. I could not stop laughing, then the audience started to laugh. The play was suspended for about 30 seconds as my shoulders were pumping up and down. To recover  from that was incredibly hard. The best corpsing moments on stage are always ones that happen accidentally.