You are here: Home / Press / Time Out (The Man Who Had All The Luck)

Time Out (The Man Who Had All The Luck) 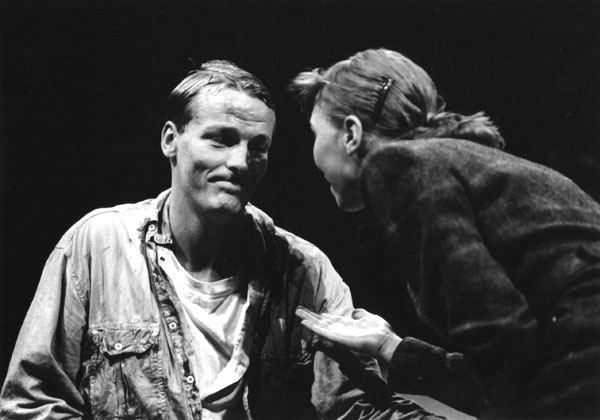 Up a winding stair, in a sunlit garret, Iain Glen is a figure at odds with the office furniture.

He declares through tense teeth that he hates talking about himself but, well, it would be selfish not to do his bit of publicity for the play he’s in at the Young Vic: Arthur Miller’s long-lost fable, ‘The Man Who Had All The Luck’. He is a resolute squirmer. His hands are in constant motion, ferreting through his hair, across his face, on to each shoulder, where they pause briefly like raw pink epaulettes, then down suddenly to grasp ankles or T-shirt, which they grip with palpable desperation.

This is the portrait in the attic of a highly successful young actor, aged 28, whose career has sputtered skywards in a sequence of loops over the past four or five years – from RADA to ‘Fools Of Fortune’ in the time it takes most aspiring thesps to get their stickies on a summer season with a decent per diem (and digs). He seems grateful for this but not overwhelmingly so and, like most decent chaps, would rather be modestly happy for himself than mealy mouthed about it.

He is oddly memorable as an actor. I first saw him in Nicholas Hytner’s lurid “Edward II’ at Manchester Royal Exchange, some four years ago, and when the publicity machine for Thames/Euston’s ‘The Fear’ plastered his reptilian features across the walls of the Underground in 1988, the connection was instant: his slippery, mandibular Spencer in the Marlowe play suddenly loomed as a spectre of late-twentieth century criminal London. The memory plays tricks; but none so disturbing as those involving jaws and teeth. Glen has recently taken on two very different roles in the films “Paris By Night and “Fools Of Fortune.

‘No, no. If I felt I was being offered parts because of my cheekbones I’d give up.’ His voice is a soufflé-light, accented with a hybrid of well-bred Edinburgh Scots and actorish plum. ‘I felt “Paris By Night was shot in the wrong way. The film noir style was imposed on a story it didn’t quite suit. And David (Hare) had ever right. It was his own very fine script. But I’d love to have seen it interpreted by someone else. I’m sure he’d not mind me saying this. He was a real help because the film was a struggle for me for a variety of reasons: because of things that were happening in my life and because quite simply, I was petrified. Really scared. It was my first film of substance, my first film part of any quality and I was acting opposite a stunningly beautiful woman. I felt young for it’ There is a sharp intake of breath, as if the memory has broken glass in it. ‘The first scene I had to do was arrive at a hotel room with Charlotte inside, waiting for me. And basically, when you’re in a small room with a beautiful actress and 25 crew-members behind her, who all adore her, and you’ve got about seven seconds to chat her up and get her into bed, and you know they’re thinking’ A sneering, macho voice erupts from where actors’ voices are supposed to come from: ‘ “All right fucking little sonny, let’s see you do it ‘ And the sentence goes unfinished. For once his arms stop ferreting and they execute a simple plea for sympathy.

The most fun you can have with an upcoming actor whose professional identity is as yet unclear is to speculate on the parts to which he is best suited. You’d imagine Iain Glen would make a good Richard II. His ‘frighted eye, his striking bones, his twitchiness and his all-round etiolation suggest ruined Kings and Martyrdom, and hint at cruelty and petulance. And you search your imaginative casting department for shriven ascetics of a more contemporary psychology, and you come up with all sorts of possibilities within Pinter plays, an insufferable Trofimov in Chekhov’s ‘The Cherry Orchard’, or maybe another Travis Bickle, an all-purpose mass-murderer type with a hundred impenetrable reasons for sweeping the scum from the streets.

But Glen has sorted out the problem for himself already. ‘The Man Who Had All The Luck’, he explains, was a dismal failure on its first run during the war, lasting only four nights. In fact, Miller was so distressed by its reception that he appended ‘A Fable’ to the title to ‘try and re-direct directors’ conceptual approach to the play.’

It concerns a naïve young garage mechanic, David Reeves, who has all the luck. ‘It has a hero who’s being thrown around by some superhuman destiny, which he’s trying to understand but can’t, because that destiny is hidden; it keeps its outlines hidden so its nature is not revealed.’ Suddenly, Glen is no longer a mumbling inarticulate but an orator of power and conviction. ‘So through the course of the play the character comes to understand that his fate is in his own hands, that fate can drop the other shoe, as it were, and that it shouldn’t stop you from picking yourself up and getting on with it. David is a guy who can’t understand why all those who seem just as capable and just as lovely as he is have had the most awful things happen to them. It’s a kind of obverse tragedy in a way. He can’t believe his own luck, so he starts to destroy himself. He actually wills a dreadful thing to happen to him so that he can make sense of it all. It’s a funny play.’

I ask him if he himself feels like a victim of fate. He’s seen it coming.

‘I don’t think so, but I do have this terrible guilt of success. Sometimes I try and wonder why it’s gone as well as it has and I look at some of my friends whom I think are equally talented or equally deserve the breaks and they just haven’t had them. I was always told I was incredibly lucky. Even at the age of ten I was always winning bets, winning silly competitions, getting the jackpot.

‘I do believe this play has a very modern message about taking fate into your own hands. Nowadays, the causes, the things you want to change about the works, seem that bit more ungraspable than before. The things people used to want to change were that bit closer to home than global warming or the Third World, and mass communication makes you feel pretty helpless amongst it all. It’s interesting that this play actually came about as a result of fate dealing a pretty bad hand to a whole people, with the depression between the wars, and also through fascism, which was taking responsibility away from the individual saying “Become part of this massive, all-solving machine.’

But isn’t it also true to say that our own inflated, massy world, because of the communications and information industries, also seems closer, more claustrophobic, as if everything is on top of you?

‘Well yes, you’re given so much choice. I think it was Sakharov who said something like the West had, in a sense, been spoiled by so much freedom, that without the experience of repression we’d built individual glass bowls around ourselves. If you’re given infinite choice then it’s very easy to just fold up and think’ He’s lost for a moment and crosses his arms to clasp his shoulders and frown. ‘Well, y’know’

He is not watching television at the moment or going to the theatre or the cinema much because he doesn’t like to vegetate and because he’s wary of seeing too much of others’ acting. ‘It’s a process of stripping away. I think one always has in the back of one’s head that there’s something just around the corner that’s a lot more interesting than what you have already. And you can go on imagining that for a lifetime and never be happy.’