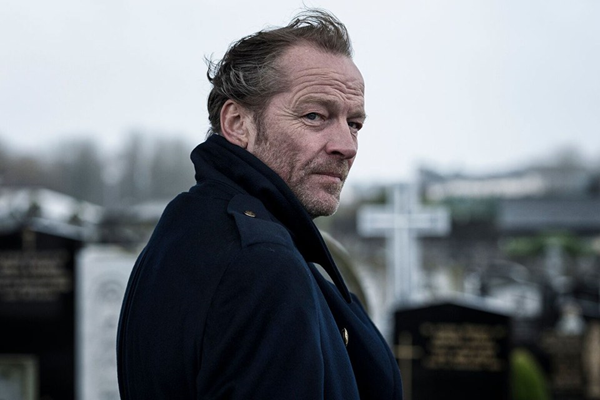 The Thrones star also weighs in on whether Ser Jorah will ever get a change of clothes.

For the last seven years, Scottish actor Iain Glen has spent a good portion of his time filming one of the biggest shows on the planet, Game of Thrones, in Ireland. When he’s out and about in Belfast, he’s the steadfast Ser Jorah Mormont. But a few hour’s drive away down on the coast of Galway Bay, they call Glen by a different name. “I can’t really go out and walk the streets without getting a lot of attention as being Jack Taylor,” Glen told VF.com over the phone. “That’s who they think I am, in a very sweet, very supportive way.”

Jack Taylor is the hard-drinking, Irish private investigator hero of the books by Ken Bruen, and the lead of a series of nine hour and a half TV crime thrillers of the same name. In Taylor—a former officer of Irish Garda Síochána and something of a ladies man—Glen gets to bring the full force of his charm out from behind the layers of repression he plays on Game of Thrones. In fact, through a quirk of European TV’s laissez-faire approach to scheduling, Glen actually appeared in his first Jack Taylor episode back in 2010, before he ever picked a sword on Thrones. And now, all nine episodes—including the third season, which just aired in the U.K. last fall—are finally available for Glen’s American fans on Acorn TV. Talk about methadone for your Thrones withdrawal. The actor spoke with VF.com about the lure of crime thrillers, why Jack Taylor has more success with the ladies than Jorah, and whether we’ll ever see poor Ser orah Mormont change out of that nasty, filthy shirt from Season One.

V.F. HWD: I heard that you’re a life-long crime thriller fan. What about that genre appeals to you?

Iain Glen: All that crime does is just give you a structure to your story in a very simple sense—a very strong beginning, middle, and end. Within that, you’re just telling stories. It can have romance, comedy, whatever you like. I suppose I think it’s a liberating milieu. There’s been a rich vein of Scandinavian drama, The Killing or The Bridge; through those, I feel like I’ve got to know Sweden a bit and Norway a bit. You get to know the politics of the place, the people, relationships. You sort of discover a society through it.

If that’s true of Scandinavian crime, I wonder what about Jack Taylor is distinctly Irish.

There’s a great deal that is quintessentially Irish. There’s a strong obsession with religion and Catholicism within Ireland, which has done lots of good things and lots of bad things. The Irish boom and bust business—they made hay, and then it all went pear-shaped—means Jack is always deeply suspicious of business and those that are making money out of the community. Obviously you’ve got beautiful coastal Galway, but it’s a paradox in some ways—it’s a very beautiful coastline and city centre, but there are problems. It’s got one of the highest suicide rates in Ireland. There’s a big youth population and quite a drug culture there. There’s a dark underbelly to it.

One of the things I like about Jack Taylor is I do think you get to know a community. You get to know Jack, his family, his difficult relationship with his mother, the people he falls in and out of love with. There’s a kind of claustrophobia, which is very true of that part of Ireland. We know it. It’s very funny. When we film there, I can’t really go out and walk the streets without getting a lot of attention as being Jack Taylor. That’s who they think I am in very sweet, very supportive way.

You’ve got this great, big, beautiful blue coat that’s iconic to your character. How much does slipping that on put you in the Jack Taylor mindset?

Ah, Jack Taylor and his coat. The producers were a little bit wary to begin with because it covers everything. But like a dialect, I think it certainly helps me as an actor. In a single statement, it tells you that he used to be Garda. He’s ex-police, and he’s still fucking with them, really. He’s upsetting them by wearing the coat, and they constantly want it back and they’re never going to get it.

Meanwhile, poor Jorah would probably kill for that coat—he’s been stuck in pretty much the same costume since Season 1.

They found it for me, a costume that just felt right. I don’t know. It just felt like it belonged to him.

But every year it gets dirtier and dingier and more threadbare. I’m worried that by the end, Jorah will just be wearing scraps.

I think Jorah just needs to land in a safer place, and then he’ll have time to change his clothing. Get cleaned up a little.

You’ve actually been Jack longer than you’ve been Jorah. I think it’s hard sometimes for American audiences to understand that you can shoot nine installments of a story over seven years.

It’s been a frustration, sometime, but I am, at least to some degree, responsible for the time it’s taken to put together because I need to be very available for it. Because of other commitments that’s been quite difficult. But you try and keep a continuity thread. We hope to make six more as soon as we can, and I think somehow in that feature format, that hour and a half rather than an hour you get away with more time between them. But there are so many different platforms now for TV. It’s been such a radical change. Now when it hits Acorn, people who never saw the first ones can watch it all at once. Hopefully, if we’ve done it right, you don’t feel the time it’s taken for us to put it together. Maybe I look ancient in the last one and I look youthful in the first. I have no idea.

I know a lot of people who watch you on Thrones are rooting for Ser Jorah to get the girl—any girl! Do you think they’ll be happy to see that Jack Taylor isn’t all about unrequited affection?

Yeah, it’s sweet, the fan reactions. I think that they wish Jorah well, and I think they wish he would—that he deserves physical love in return or something. I don’t know. I mean, the male fans react a little differently. But there is a certain female fan where maybe they see themselves in the story, and as long as you’re failing as Jorah, you’re maybe still more available for them in a funny way. Jack is a polar opposite in that he will get himself into terrible sexual pickles all the time, and is always doing very inappropriate things like having sex with the major suspect and that sort of stuff. He goes there without thinking and then ponders it afterwards, and Jorah ponders it too much, I think. Not that Jorah’s ever going to get it. Well, he might. Who knows?

Do you have any general words of optimism or hope for Jorah fans who are quite worried about that spreading stony rash on his arm?

In all honesty, no one is more worried than me. There’s a high death rate in Thrones, and I desperately don’t want to be part of that number. We’ll have to see what unfolds.