You are here: Home / Press / In Theatre, Broadway (The Blue Room)

In Theatre, Broadway (The Blue Room) 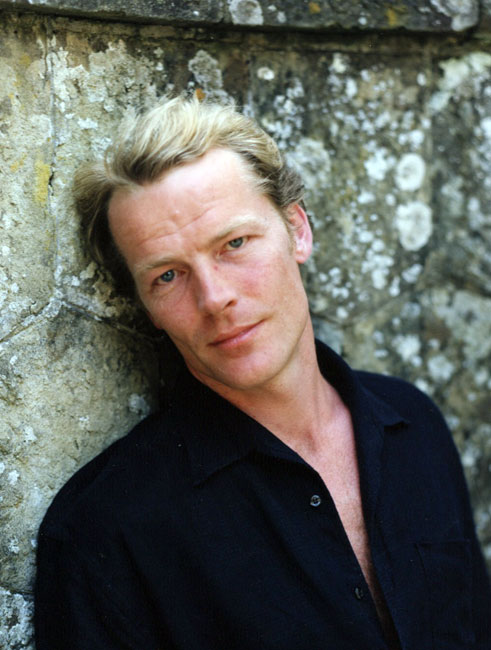 Getting intimate with The Blue Room star Iain Glen.

If Nicole Kidman was the primary reason for the feeding frenzy of press attention that engulfed The Blue Room on its London premiere, the fact is that she could not have done it alone. So director Sam Mendes fielded her the absolutely perfect partner: Iain Glen. The RADA-trained, Scottish-born alumnus of stage and screen is an actor of guileless charm, extraordinary sensitivity, alert intelligence, and terrific technique – and he’s one of the most unaffected and sincere performers I’ve ever met. He’s nothing if not versatile, either: One season he’s starring with the Royal Shakespeare Company (where he played the title role in Henry V); the next, he’s leading the original cast of the latest Boublil/ Schnberg epic, Martin Guerre, in the West End. Now, he’s assaying no less than five different roles within the same play in The Blue Room.

On a crisp November morning, Glen had just returned form Dublin (where his wife, actress Susannah Harker, was appearing in Uncle Vanya) and was three days away from relocating to New York for the Broadway transfer of The Blue Room. He took time out to talk to In Theatre about the play – and, of course, about working with Nicole – delivering his answers in a soft but distinctive Scottish brogue.

Congratulations on the success of the play. Did you expect it?
We had great fun doing it. It was one of those rare occasions as an actor where you really enjoy the rehearsal process and getting to know a play and another person; and then you open a show and it’s received as well as you hoped it would be, and the audience appreciated it, too. So often, you rehearse a play and it’s a frenetic, difficult rehearsal, but it all seems worthwhile if people are kind about it. Or, conversely, you have a very enjoyable rehearsal process, and then you open and it goes disastrously wrong. This was one of those rare ones that actually worked, and I felt it worked all the way. But you never know.

It’s an intimate piece.
We had to get very intimate with each other very quickly as actors. It’s easy to kid yourself that you’re getting on really well, but with Nicole – through Sam’s help – we immediately established a very easy relationship. I think that was very important. People who come to the play see us do five different characters each; in a way, it’s curiously about the relationship between Nic and I as much as anything. But audiences come willing to suspend their disbelief. They know it’s two actors and allow us to be different people – because they’re getting to know us as actors.

But it must also be a difficult piece to do technically.
That’s part of its theatricality. Theatre has been frightened off [this kind of work]: Through striving towards a kind of filmic realism, it has become suffocated in some way. But theatrical bravery is sometimes necessary. You can take risks in theatre. It’s not about super-realism all the time; it’s about transporting people to different places. People used to love seeing actors do different things: As part of the repertory system, audiences loved to go back to see the same actor in a series of different plays. They get that here, but within the same play. You can feel the frisson – people seem to genuinely enjoy you being different people, to see you work as an actor. So often, your role is to make people believe you are that person and that person alone, so you are trying to hide being an actor all the time. There is no way to do that here. But our audiences have been generous, and they relish it.

It’s quite a contrast to your last theatrical assignment, leading the cast of Martin Guerre.
Yes, it’s funny sitting here. [We are in a private club across the street from the Prince Edward, where Martin Guerre played.] That was home for a good long stretch. Musicals are an entirely different beast. So many elements go into making a musical: very vivid designs and sets, huge numbers of people, massive orchestras and music departments. With this play, we’re at completely the opposite end of the spectrum. It’s just two actors and a set. No prop is used within the play unless it’s directly referred to in the text. The play is entirely about the relationships established between the various characters in La Ronde. In a nutshell, it’s about how the sexual act can mean such different things to different people at different times; how it can create laughter or sadness, anger or tenderness.

Would you do another musical?
Not in the near future. It was a long stint, longer than I like to be in one job. It was quite a year: We did two versions of Martin Guerre. At one point, we were doing the old version during the day, and in the afternoon recording the album with lyrics we’d never really seen before. But I love things evolving. You don’t get things right straight away. That’s one of the risks of opening straight into the West End.

You constantly seek out new challenges in theatre and film.
I don’t know if there’s anything conscious there – I suspect there is, really – but I believe in spreading myself fairly thin. Your ability to sustain interesting work is enhanced somehow; if you can tap into each medium, I think you’ve got more chance of doing the work that you want. I feel challenged as an actor through variety, so being in a huge theatre or an intimate theatre, in front of a film camera or a radio mike are just different aspects of an actor’s abilities. I would feel limited if I wasn’t pushing myself into all of those areas. You hope that you’ve got enough choice, and I’ve been lucky – touch wood – that I’ve never needed to do anything for the money. There’s a terrible fear – and it haunts an actor all his life, I imagine – of getting to a lean period, where you suddenly think, “I just have to do that because I can’t afford not to.” Because I’ve been spoiled that’s my worst nightmare.

What about other fears? How does your wife respond, for example, to the intimacy of The Blue Room?
You get hardened to it. The game we’re in is that we’re playing people falling in love with each other or killing each other; that’s the main gist of what we do. So you get used to seeing your spouse in intimate clenches with different people throughout your life. Every day I would tell Susie about going through the embarrassments of rehearsal – for example, I would tell her, “Today we kissed for the first time.” So she didn’t feel excluded and by the time she came to the show, she was much more aware of the process we’d been through than members of the public would be.

Many may regard you as the luckiest man in Britain and on Broadway for working with Nicole.
I do feel very lucky, but probably for more mundane things. I don’t walk on stage thinking I’m going to kiss her, but because I enjoy acting with a really good friend. I see Nicole’s beauty in terms of her kindness and generosity, her loveliness as a person.