You are here: Home / Press / The Guardian (Ghosts) 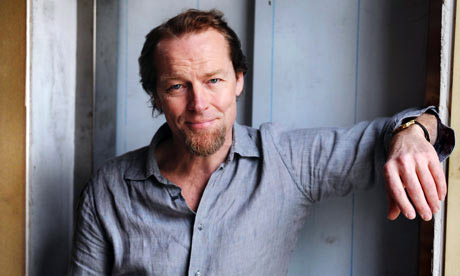 Leading actors do not often make the leap into directing, but Iain Glen has wanted to for years

“I’ve been aware of the work I do as an actor being directorial in feel,” he says, “I have ideas about how a play could manifest itself, a sort of overall picture. But 95% of the time, I keep my mouth shut.” And it might have remained that way, had the producer Thelma Holt not intervened.

Glen first met the “eccentric and delightful” West End veteran in 2006, when she oversaw the London transfer of the RSC’s The Crucible (in which Glen, as John Proctor, gave an incendiary performance). Holt was casting around for new projects for him, but nothing came to fruition, until he took part in a test-run private performance of a new version of Ibsen’s Ghosts, by Frank McGuinness. “Afterwards, I went into flights of fancy about the play and how one could realise it,” says Glen. “That seemed to be enough for Thelma to say, ‘Well, why don’t you direct it?'”

Which is why for the past few weeks he has been locked in a rehearsal room in a former factory in London, preparing for his directorial debut. “I’ve never been so wired,” he says. His elder brother Hamish is a director – he runs the Belgrade in Coventry – but Glen hasn’t sought his advice. He doesn’t need to: in his 25-year career, he has worked with Nicholas Hytner, Richard Eyre, Michael Boyd, Declan Donnellan, Dominic Cooke and Sam Mendes, soaking up influences that other fledgling directors might never encounter.

Glen is also performing in his production, playing Pastor Manders, whose stern morality forces the other characters to live lies that unravel. “It’s not as mad as it might seem,” Glen says of his dual role. “Once Manders establishes the strictures that everyone else is living under, he steps back, and the heart of the play is the relationship between a mother and child.” Nonetheless, he admits he is finding it tricky. “As an actor, I’m familiar with having bursts of energy, where you’re giving things a try, and then you have down time. Here, I have those bursts of energy and then, snap, it’s for you to dissect what’s gone on. I’m happiest when I can just be a director, and watch.”

Is a career change on the horizon? “I’m too in love with acting,” he says. And he’s not sure he likes the demands placed on a director. “You have to have conviction, in a way that you don’t as an actor. The danger in theatre is always that it looks staid and rehearsed, so it’s healthy for actors to be unsure and playful. With directing, there are concrete decisions to be made: is it going to be black or white? Are you going to be here or there?” Initially, Glen says, he dithered; now, he is more definite. “Directing is very grown-up, in a way that I’m not. I’m too much of a big kid.”

You wouldn’t know it to see him on stage: whether he is performing in Miller, Chekhov or Shakespeare, Glen is a commanding presence, meticulously illuminating a character’s psyche. In person, though, this 48-year-old is as fidgety as a toddler. He tugs at the collar of his blue linen shirt, rubs his tummy, does up a button, stretches out his legs, snaps upright, scratches his ankle, musses his hair, cups his blond goatee. Sitting next to him in an auditorium must be a nightmare.

This restlessness is evident in Glen’s CV: beyond the classics, it takes in everything from independent British movies to Tomb Raider and Resident Evil, via BBC costume dramas, a nude appearance alongside Nicole Kidman in David Hare’s The Blue Room, and the musical Martin Guerre. No wonder he’s never been typecast: he has never settled at anything long enough. Glen left Rada in 1985 trained only for theatre, yet went straight into the TV film Blood Hunt, with actor Andrew Keir. “Suddenly I was in front of a camera with this lovely older actor. The world transformed for me.”

While he’s mildly frustrated that “invariably the things people have seen are your least proud work”, he appreciates the advantages of appearing in big-budget Hollywood fare. “It pays well, and that allows you to have a certain quality of life, to do that interesting radio play. I have a problem with actors who get involved in these things and complain: you make the choice and you should do the best you can.”

Glen started acting while at school in Edinburgh, but not in the conventional way. Instead of “dressing up and pretending to be Brutus”, he and his friends, including the future DJ Nicky Campbell, would terrorise locals. Glen would lie in a pile of leaves and pretend to be dead, until a passerby spotted him and panicked, at which point he would leap up and laugh. “I would give trauma to people,” he says, properly ashamed. He and Campbell also called a talk show on Radio Forth with a series of fake personalities. “I would say I was a mugger, or a glue manufacturer with a product that was safe for kids to sniff.”

By his own admission, Glen was a “teenager from hell”. He was unhappy at school and at home, locked in competition with his two older brothers. Acting, which he discovered at Aberdeen University, allowed him to escape himself. When he dropped out to study at Rada, Glen transformed into “an annoyingly good pupil. I was into my leotard, doing my vocal warm-ups before anyone, asking what more I could learn. I was disgustingly obedient.”

His fractious youth is now “the cause of great laughter” in his family; he is lucky that his own 14-year-old son Finlay, from his marriage to actor Susannah Harker, isn’t giving his father the same hell. “Finlay’s a mellow soul,” says Glen. He and Harker divorced in 2004; Glen met his current partner, Charlotte Emmerson, while they were acting in different productions at the National Theatre. The couple have a two-year-old daughter, Mary, whose “manic ebullience” sounds more typical of her father – and who ensures that he stops thinking about work the moment he arrives home.

Not that Glen lacks distractions: he keeps busy with sport, plays piano and guitar and still has the odd rock-star fantasy: “If I could go on stage and be Mick Jagger, just for one song, that would be brilliant.” It’s never going to happen, but Glen doesn’t mind. “If the next five years of my career could be like the last five, I’ll be happy. But a time will come when I won’t want to do it any more. All I would wish for – and it’s wishing for a lot – is that I’ve put enough aside to say: OK, I don’t need to work now, I can retire.”