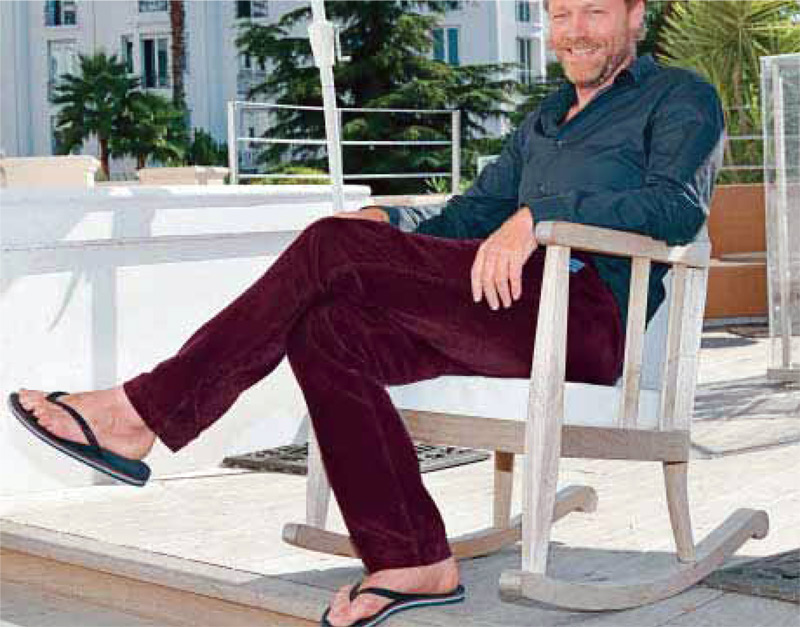 Iain Glen on his latest role as a booze-soaked cop, getting intimate with Nicole Kidman – and why his Downton villain Sir Richard Carlisle should have got the girl…

He’s a man of many parts, is Iain Glen. He was the dastardly Sir Richard Carlisle, Lady Mary’s suitor in series two of Downton Abbey and he played Margaret Thatcher’s father, the redoubtable Grantham grocer Alf Roberts, in The Iron Lady, alongside Meryl Streep. On stage, he did a memorable turn – literally – cartwheeling while stark naked opposite Nicole Kidman in The Blue Room. He’s tackled most of the major Shakespearean roles and appeared in Doctor Who, Spooks and Game Of Thrones.

Now, here he is again as Jack Taylor, a rough and ready ex-policeman in an eponymous new Channel 5 crime series set in Galway, and 51-year-old Iain couldn’t be happier. ‘I think I’d like him if he existed,’ he says in his soft Edinburgh burr. ‘He drinks much too much but he’s a moral man who dances to no one else’s tune. In his own, cackhanded way, he’s trying to solve society’s woes. He’s willing to pursue crimes that the government or the police have given up on. He’s a loner with a slightly dangerous edge that women find attractive.’

So far, five feature-length dramas based on writer Ken Bruen’s stories have been filmed. It’s a world away from the glittering white-tie-and-tails dinners at Downton. Iain says he loved playing Sir Richard, not least because he already knew several of the cast. ‘Hugh Bonneville is a very good friend of mine. I know Jim Carter [Carson the butler] and I’ve worked with Dame Maggie before. In my opinion, Lady Mary and Sir Richard would have been rather well-suited. They’d have had quite a sparky time together. And being a baddie gives you a little bit more room to play with. But I wanted him to be a genuine threat to Mary’s feelings for Matthew. The audience had to believe that the relationship could have had legs. Then, when it was clear his feelings weren’t ever going to be reciprocated, he resorted to the threat of black-mailing her by exposing in his newspaper the death of the Turkish diplomat in her bed. Good stuff.’

His most memorable theatrical experience, he says, was in The Blue Room. ‘It was one of those dream jobs. The director Sam Mendes sent me a letter. Everything was in place. Nicole Kidman had already been cast. We’d play it in London and then on Broadway. Would I like to do it? Three-and-a-half seconds later, I was on the phone to him.’

He met Nicole Kidman at Sam’s house. ‘We were going to be working together, intimately, for a long time. It was important that we got on. I needn’t have worried. I found her so focused and rather brilliant as an actress. We had a very happy rehearsal and then it turned into this phenomenon.

‘It’s a personal quirk, but I’ve never minded being nude in public. In this case, the play revolved around the sexual act so it was justified. But it was slightly comical. ‘There was I, cartwheeling, doing handstands and playing the piano without a stitch of clothing to little or
no reaction. And yet, when Nicole briefly slipped out of her dress, her back to the audience and showing only the hint of a buttock, you could
feel a frisson run around the theatre.

We stayed good friends for about two or three years but life moves on.’ In his defence, he has rather a lot of demands on the domestic front. His son, Finlay, by his ex-wife, actress Susannah Harker, is 17. He met his cur- rent partner, actress Charlotte Emmer- son, ten years his junior, when they were appearing at London’s National Theatre in different productions.

They have a five-year-old daughter, Mary, and Juliet, born at Christmas. How’s he coping with fatherhood again in his early 50s? ‘If I think ahead to how old I’ll be when Juliet goes to university, it does give me pause for thought. But I’m lucky I’ve got quite a lot of energy. There’ll certainly be no chance of vegetating on the sofa.’ He’s just returned from Morocco where he’s been filming Series 3 of Game Of Thrones in which he plays Jorah Mormont. And there’ll be further forays into Jack Taylor’s dysfunctional world. ‘You’re looking at a happy man,’ he says.