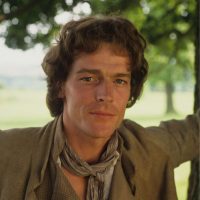 The honest, upright and faithful Adam Bede is a humble carpenter who falls in love with the beautiful but shallow Hetty Sorrel.

Hetty spurns Adam in favour of a wealthy marriage to a nobleman, Lord Arthur. Though deeply hurt, Adam never relinquishes his love and tries to win Hetty back in his own single-minded, diligent fashion. Balancing the romantic drama is the calm, good-hearted presence of Adam’s childhood sweetheart, Dinah Morris who waits patiently for Adam’s love to return.

In this fine BBC drama, adapted from George Eliot’s classic novel, the evocations of a bygone rural life are charged with passions of seduction and betrayal, as Adam discovers moral growth and redemption.

After all the cold scraps of recycled repeats and old movies, ‘Adam Bede’ (BBC1) itself adapted by Maggie Wadey and directed by Giles Foster was one of the few new works of the New Year and it was as good as any adaptation of the classics the BBC has done for a very long time.

– The Mail On Sunday, John Wells

Adam Bede was as good as any adaptation of the classics the BBC has done for a very long time.