You are here: Home / Screen / The Racer 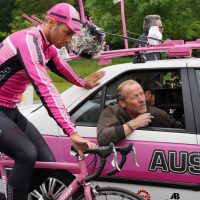 Summer 1998. The opening stages of Le Tour de France are relocated to Ireland.

Belgian rider Dom Chabol (late 30s) has been one of the best “Domestiques” (support riders) on the Tour for the last 20 years. It’s a sacrificial role – setting pace, blocking wind, and providing support to enable the team’s sprinter to victory – winning is not an option. But Dom secretly harbours a desire to wear the yellow jersey just once before his career is over.

At the start of what will likely be his last Tour, Dom is unceremoniously dropped from the Team he has dedicated his life to. His best mate Sonny, the team masseur, fails to reassure him about his future. But a chance liaison with Lynn, a young Irish doctor, softens the blow, and Dom starts to accept – and even enjoy – the idea of civilian life. But as he gears up to go home and to face his estranged sister, a massive doping error knocks another teammate off the Tour and Dom is thrown back in the saddle…

I thoroughly enjoyed The Racer, the mix of the excellent cinematography, a nicely done heart beating soundtrack with the racing scenes and cast that work well together on the screen, The Racer is a film that takes us on a journey of a riders ambition and determination.

The Racer is an affecting character study and a refreshingly low-key look at a topic that has repeatedly been sensationalized.

Cycling films don’t come along very often, and fictional cycling films don’t tend to come along at all, so The Racer is a real treat.
The film centres around team Austrange’s veteran leadout man Dom Chabol (Louis Talpe), and his personal struggles in the role of a 39-year-old domestique with his contract finishing and the team focussing on its egotistical Italian team leader Tartare (Matteo Simoni). Chabol’s ally in it all is soigneur Sonny (the legendary Iain Glen), a loud Scottish former pro who runs the team’s doping programme and helps add some good comedy value.

The latest film from Kieron J Walsh, nearly a veteran of Irish TV and film, has a lot to say about the gruesome politics of professional cycling.
Were the film released in 1998, casual viewers might have been shocked at the promiscuous levels of doping, but, following revelations about Lance Armstrong (whose run of seven wins began a year after the events depicted), we now fully expect the hotel rooms to be decorated with bags of blood and the fridges packed with mysterious phials.
Nothing about this world is attractive. It is the sort of hyper-male world where “Hello, ladies!” is still seen as a satisfactorily hilarious opening to a team meeting. The new boy has to endure tedious practical jokes. If the riders aren’t being pumped full of Erythropoietin, they are being fed mounds of plain pasta while their trainer scoffs cheeseburgers.
The Racer is not accusatory in its tone. There is a sense that the culture is now irrevocably established and, like fish swimming in the only available water, the riders see no easy escape. Dom’s frustration is apparent, but not until the closing moments does he make a proper attempt to break the conventions. It is a strong, stoic performance from Talpe in a film that doesn’t allow its secondary characters much nuance. This fellow is volatile. This chap is susceptible.
Those outer inadequacies are, however, easy to forget when James Mather’s camera is scooting in and out of the hurtling peloton. With so much of the action confined to a mid-market hotel, it comes as an exhilarating release to zip furiously down rural roads and across closed-off urban thoroughfares. Those second-hand thrills don’t come close to justifying the pharmaceutical and psychological pressures put on the cyclists, but we do, at least, get some sense why someone would sign on in the first place. A gruelling treatment of compromised glamour.