You are here: Home / Theatre / Road 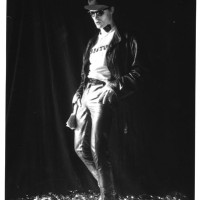 Nothing I had read about Jim Cartwright’s Road ñ which actually started life at the Theatre Upstairs last March and which is now being revived again in the main house with Ian Dury ñ had quite prepared me for its emotional impact. John Osborne wanted a theatre that gave one “lessons in feeling.” Cartwright’s play does that, quickening our sympathy for the baffled young and old living in the blighted, scarred sections of our divided land.

It is he most searing indictment of Thatcherite England I have seen for a long time. A superb cast of seven are unforgettable in their many roles including Susan Brown’s frustrated seductress, Jane Horrock’s embittered wide and Iain Glen’s Skinhead-turned Buddhist.

Of the play itself enough has been said to fill a dictionary with superlatives. The writing is tough, funny, bitter, harrowing.

Jim Cartwright’s scorching, bang-up-to minute play is a Sate of the Nation piece with a vengeance. The world he shows us is a raw one and his language, coupling obscenities and street poetry gives us a passionate, unavoidable truth about a dis-United Kingdom. The openness and originality of Simon Curtis’s production is a striking image for one theme in the play itself: humanity can be assertive, extraordinary and just plain lively in any sort of place.

The most significant and original new English play to appear in London for a long time.

It is the most searing indictment of Thatcherite England I have seen for a long time. A superb cast of seven are unforgettable in their many roles.