You are here: Home / Screen / The Last Legion 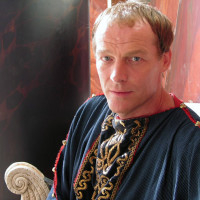 During the Fall of the Roman Empire, its last emperor, 12-year-old Romulus Augustus rules for a day before losing all that he loves: his family, his home and an Empire that once stood for truth and honor.

Imprisoned on the island-fortress of Capri, Romulus, aided by the clever strategies of his teacher Abrosinus and the heroic skills of his legionnaire Aurelius, escapes the island. Accompanied by his friends and a mysterious envoy from Constantinople, Romulus travels to Britannia in search of the Last Legion — the fabled Dragon Legion. There, Romulus will fight alongside his friends to make his last stand for Rome, and take his first steps to becoming the man and the King who started the Arthurian legend.

Anyone raised on Fifties’ adventure yarns such as The Vikings and The Seventh Voyage will recognize their influence on The Last Legion, an action packed sword-and-sorcery saga set during the dying days of the Roman Empire.