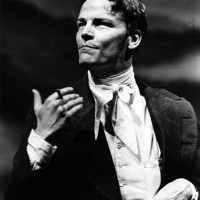 This superbly adapted novel is transformed into an intriguing piece of theatre by a group of six very talented young actors. Melodrama is thrown out of the proverbial window – the actors and actresses debut as “the young company” is flawless. After auditioning over 400 of the top young actors in Britain the director has cast them into a deep, passionate and enthralling story. The difficult job of narrating within the character of Mr Lockwood performed by Iain Glen – a 24 year old who has RADA’s top award to his name – is natural to the actor who held the audience’s attention whenever he spoke. The production kindles a delightfully Victorian aura and a very full evening’s entertainment.

The dramatization is skillfully done. The plot unravels well. Narrative is delicately blended into action. Ms Bronte’s passionate vocabulary falls naturally from the lips of the actors. Iain Glen is terrific as the toothy, transparent, decent Mr Lockwood.

Perfect power and passion. The Birmingham Rep’s new Young Company made their stage debut this week and could hardly have done better. Director Derek Nicholls chose Emily Bronte’s Wuthering Heights for the opener, and you will be hard-pressed to find more power in the moody classic. Wolverhampton-born playwright Vince Foxall penned the adaptation, a far truer reflection of the passion, revenge and cruelty of the novel than the romantic Olivier film. Paul Keirnan, magnificent, magnetic Heathcliff, slipped easily from a besotted and kind-hearted fellow to a dark and moody man who coldly plots his revenge. Lovely Marie Francis is a wild-eyed fury of a Cathy spitting and fuming with such intensity that the people in the front row of the theatre visibly shrank back. The narrator, Lockwood, is played by mild-mannered Iain Glen, obsessed with the Wuthering Heights tragedy, and Timothy Watson and Crispin Redman are good as the jealous Hindley and Edgar. It is a passionate, powerful play, stage managed to perfection.

The young company is bright and talented and conveys that fervent belief in its work which is an excellent thing to see. The play will bring a taste of good theatre into parts of the area the Arts Council scarcely reaches and I truly wish them well.